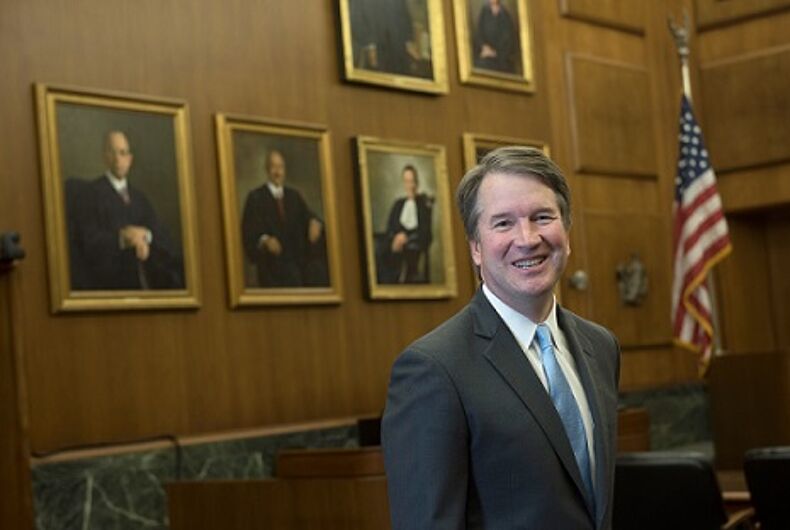 By the time Brett Kavanaugh finally got to say something at his confirmation hearing, his comments were almost beside the point. So now we know that, metaphorically speaking, Kavanaugh lives on “the sunrise side of the mountain,” which is pretty impressive for someone who dwells in what the president calls a swamp.

We also know that Kavanaugh is optimistic about “the future of our independent judiciary.” But as the opening of the Kavanaugh’s hearing demonstrated, that’s a one-sided belief.

By any standard, Kavanaugh is the most political nominee to the Supreme Court in decades. He’s been at the center of some of the greatest Republican political assaults in modern times, including Ken Starr’s investigation of Bill Clinton and the notorious Florida recount of the 2000 presidential election results.

So it should come as no surprise that on the first day of hearings Democrats mounted a coordinated attack on Kavanaugh.

“I am concerned whether you would treat every American equally or instead show allegiance to the political party and the conservative agenda that has shaped and built your career,” Sen. Kamala Harris said.

But it wasn’t just the nominee that Democrats attacked. It was the process of confirming him. Kavanaugh has a long paper trail, having served in the Bush White House. But the Trump administration only released some of that paperwork late Monday, when there was no time for Democrats to plow through it. That prompted Democrats to call foul and seek a delay.

Republicans are frantic to confirm Kavanaugh as soon as possible, in part because they know that the landscape grows less conducive each day closer to the midterm elections. Nor are they helped by the president, who has taken to tweeting that he believes the rule of law means two Republican Congressmen under indictment should have gotten a pass because they’re his supporters.

Kavanaugh’s problem is that he looks as if he could be a big help on the bench to Trump. He has argued in the past that president’s can’t be indicted and that the the office of independent counsel, such as the one conducting the Russia investigation, is of dubious legal standing. At a time when Trump’s disregard for legal niceties is growing, Kavanaugh looks suspiciously like an enabler.

None of this deters Kavanaugh’s supporters. The religious right is pulling hard for him. The American Family Association sent an alert to supporters complaining that it was Democrats who were showing “no respect for the American process or the rule of law.” James Dobson, who founded Focus on the Family, says that Kavanaugh should be confirmed as an antidote to “judicial tyrrany.”

There’s plenty more to come, as Senators press Kavanaugh on his views on key issues, including marriage equality. But Kavanaugh will be as bland and vague as possible, in keeping with past nominees (from presidents of both parties). But as the opening day showed, the fight has grown beyond Kavanaugh himself. It’s about how much Republicans will do to get the outcome they want while they still have the chance.

A black transgender woman was found dead in Louisiana

Good Lord! These priests were busted having sex in public