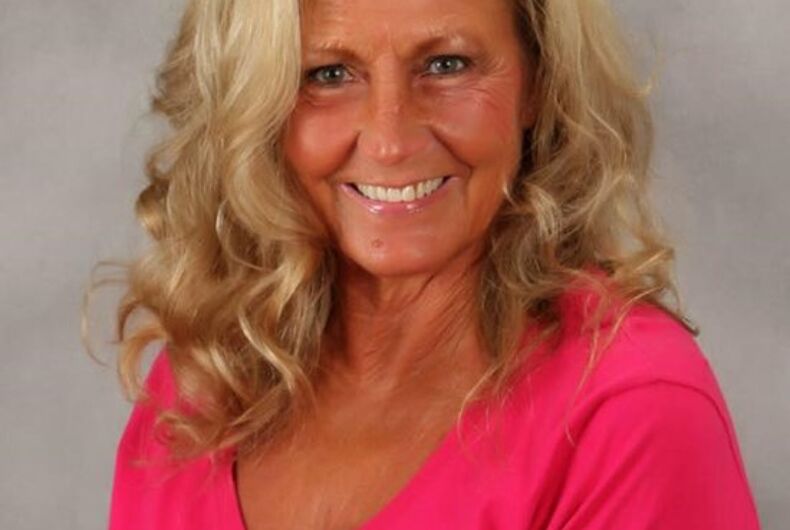 Cindy Reinert’s generation of women helped start the sexual revolution, which included access to birth control and a woman’s right to control their own bodies. It’s no wonder Reinert’s political platform is rooted in advocacy and social justice.

“Many of the main focuses of my campaign are protecting women’s access to reproductive health needs, pregnancy discrimination, equal rights under the law regarding wages, jobs, and education opportunities,” Reinert said.

She added, “Discrimination against women in the workplace, LGBTQ rights, and sexual harassment are also part of my campaign’s platform.”

Reinert is currently running for a seat at the table in the Indiana House of Representatives. If elected, she will unseat Republican incumbent Charles (Woody) Burton in the District 58 general election. He is one of the most conservative Republicans and has often backed anti-LGBTQ legislation.

She has already received backing from Moms Demand Action for Gun Sense for “standing up for gun violence prevention and recognizing gun safety.”

Additional endorsements include Leap Forward, the Indiana chapter of National Organization for Women, and the Indiana Federation of Democratic Women.

Reinert has not been shy about the topic of gun laws and, in fact, wrote this piece about how she feels about the Second Amendment.

“My dad is 88 years old, and he still has guns. My son-in-law has guns. My daughter has one. Many of my friends, and/or their partners have guns,” she wrote. “They are not mentally ill, and they are responsible gun owners. They have shotguns, rifles, handguns. Their guns are registered. The ones that need permits to carry, have them.”

“While I would never want to take a gun away from someone, I don’t understand the need for civilians to own semi-automatic rifles.”

Reinert credits her career as an attorney and lifelong involvement in activism as preparation for the role she hopes to achieve during the midterm elections.

“The job of a Representative in the State House is to be an advocate for the people, to be their voice and their champion,” she said in her campaign announcement.

“In this role, I will work toward, among other things, the goal of eradicating our community’s unacceptable poverty, infant mortality rate, and ongoing crisis at the Department of Child Services,” she said.

Reinert recently filled out a survey for Ballotpedia where she stated that Indiana’s foster care system “has a ‘grab and go’ policy, so there are too many kids in the system… Additionally, Indiana is one of only five states without a hate crime bill. The supermajority cannot agree on the ‘language.'”