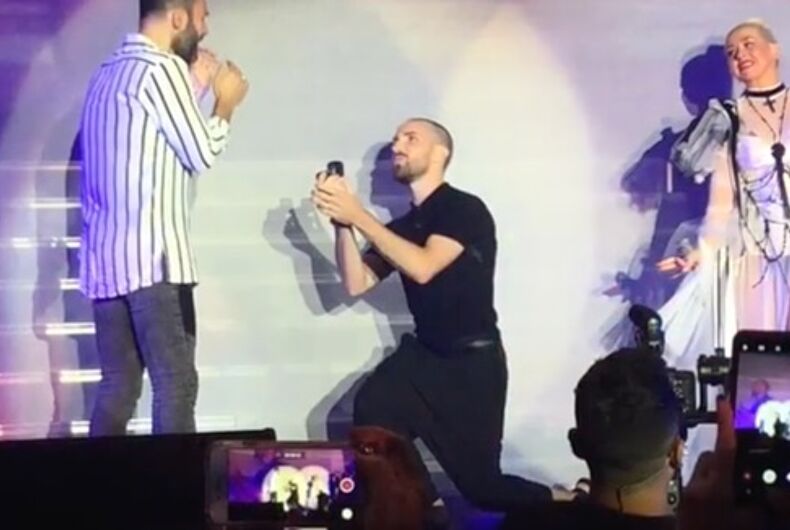 Christina Aguilera kicked off her new Liberation Tour in a grand manner. It’s her first concert tour in 10 years.

“I want to share this with you guys,” the singer told the audience. “I have a really special surprise that’s happening tonight.”

When they got on stage, Lear looked at Kontomanolis and said, “I could not have imagined you could have a better moment than [with] this woman, who has inspired you throughout your whole life and has brought you so many things.” He also thanked Aguilera for “being an inspiration to not only everybody here, but to him.”

And then he dropped to his knee and pulled a ring out of his pocket.

“You’re kind, you’re beautiful, you’re loving,” he said to Kontomanolis. “Six years ago, you proposed to me and you gave me the opportunity to say yes. Tonight, in front of Christina, I’m going to ask you the same question.”

“You are so important to me. You’ve gotten me through so many important things,” Kontomanolis told Aguilera. “I don’t know where I would be if I didn’t have you and your music to lift me up and just carry me through.”

“I wanted to share and dedicate this special moment to two people who have been tried and true through my life and supported me. So, I want to wish you guys the best of luck. Thank you so much! Muah! Congratulations, you guys!”

And then she launched into her wedding song, “Unless It’s With You,” as the audience cheered.

Watch the moment below and get all the feels yourself.

@xtina this is a moment we will never forget. Words aren’t enough… but thank you thank you thank you. And @benlear123 you made my dream come true ❤️ #xtina #liberationtour #proposal #grateful #isthisreallife **** WE DO NOT OWN THE RIGHTS TO THE MUSIC IN THIS VIDEO. CREDIT TO THE ORIGINAL OWNER***

Did Brett Kavanaugh nail a dead pigeon to his gay roommate’s bedroom door?

Can this progressive woman unseat one of Indiana’s most conservative state representatives?