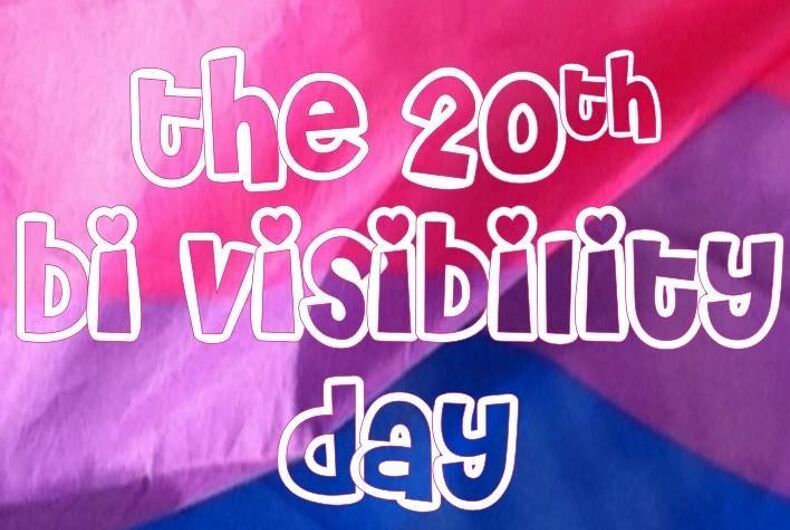 Sunday marks the 20th anniversary of Bi Visibility Day, also known as International Celebrate Bisexuality Day. The day has been marked each year since 1999 to highlight biphobia and to help people find the bisexual community.

According to the Pew Research Center, 40% of LGBTQ Americans identify as bisexual.

Specifically, the study found that about 10 million people, or 4.1% of the U.S. adult population, identified as LGBT in 2016, according to the latest estimates from Gallup. This represents a modest but significant increase from 8.3 million people (3.5% of adults) who said they were LGBT in 2012.

The same research showed that gay men and lesbians are more likely than bi people to be out in their every day lives.

Overall, only 28% of bisexual people in the U.S. said that all or most of the important people in their lives are aware that they are LGBTQ.

Bi Visibility Day highlights bisexuality and the challenges posed by biphobia and bisexual erasure, as well as celebrating the work of a growing number of local, national and international organizations around the world which champion bisexual visibility and equality.

Last year there were more than 130 events marking Bi Visibility Day, from exhibitions, talks and film screenings to picnics and socials in bi-friendly bars.

A host of public buildings around the world flew the pink, purple, and blue bisexual flag.

Jen Yockney MBE, who has run the international listings site BiVisibilityDay.com for nearly two decades, commented, “We saw events in at least 35 countries around the world in 2017 – a new record.”

She added, “I’ve been organizing events marking Bi Visibility Day since 1999 and the transformation in that time is huge. We are more talked about and more heard as bi people than ever before; yet also the challenges and particular needs of bisexuals have been thrown into sharper relief over that time.”

Changes that were notable, including that “back then, bi was often seen as a kind of ‘gay lite’ with bis experiencing less impact from social homophobia, but research increasingly shows bi people have greater mental and physical health challenges than gay or straight people,” Yockney added. “We’re more likely to experience domestic violence from our partners, too.”

She added, “Far from the ‘best of both worlds’ cliche, the challenge of either persistently reasserting your bisexuality or having part of your life erased proves wearing for many bi people. Where lesbians and gay men have one closet to escape, many bi people find that leaving the one closet leads to being put in another.”

What is the solution? Yockney said it’s “greater bisexual visibility” and “helping more bis find a space where they are neither in the ‘straight closet’ nor the gay one.”

More information about Bi Visibility Day including events listings can be found on BiVisibilityDay.com.

Just how different will progressive candidates be from establishment Democrats?