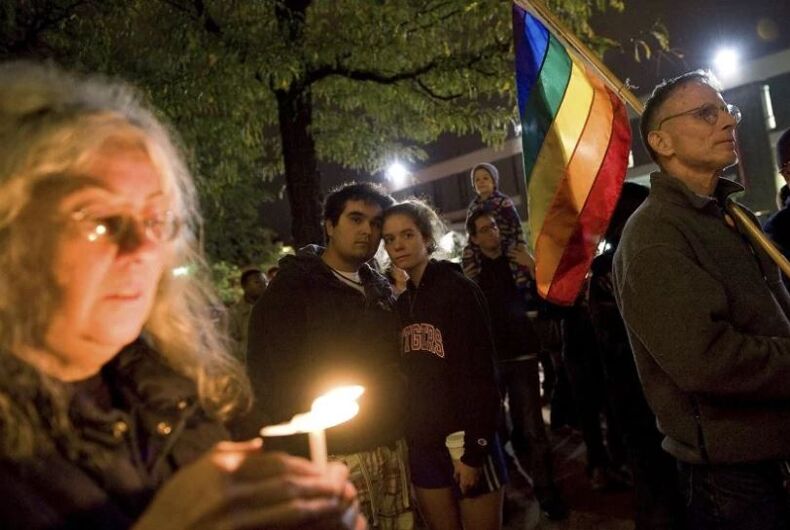 People participate in a candlelight vigil for Rutgers University freshman Tyler Clementi at Brower Commons on the Rutgers campus in New Brunswick, N.J., on Oct. 3, 2010. Clementi killed himself on Sept. 22, 2010, after being bullied for being gay. Photo: AP Photo / Reena Rose Sibayan, File

Eight years ago this Saturday, my son, Tyler Clementi, died by suicide after vicious cyberbullying at Rutgers University because of his sexual orientation. He was 18 years old.

Tyler was not the first gay youth to die after cruel attacks by peers, and sadly, he wasn’t the last. Study after study continues to find that LGBTQ youth are at a higher risk for suicide than their heterosexual peers.

And those raised in religious communities, many of which teach that being LGBTQ is a sin, are even more likely to attempt suicide.

Think about that. Religious communities are supposed to be a source of strength and love, as my church family was, providing comfort when my son died. But the fact remains that being a part of a religious community increases the risk of an early, tragic death for LGBTQ youth.

In sharp contrast, participation in a religious community decreases the risk of suicide for heterosexual people.

What is different about the treatment of LGBTQ people in religious communities that creates such tragedies?

My family once belonged to a church that taught being LGBTQ was a sin. Like so many other LGBTQ youth, Tyler must have felt rejected, unwanted and shamed. My son did not believe he could be both Christian and gay.

When theology is used to inflict harm and exert power over vulnerable people like my son, it becomes religious bullying. Church teachings are used as social and political weapons to exclude, degrade and dismiss LGBTQ people.

The irony is that religious communities are uniquely positioned not only to end bullying in their houses of worship, but also to support LGBTQ youth who face isolation and cruelty in other aspects of their lives. By acknowledging religious bullying and working to rectify it, religious communities can support some of their most marginalized members while adhering to their own teaching to love their neighbors.

It should not take yet another LGBTQ youth suicide to end religious bullying.

When he came out to me, I had to begin reconciling the teachings of my church with my unconditional love for my son. I am grateful to worship now at a church that affirms the lives of LGBTQ people. It is a church that welcomes and accepts everyone as perfectly created in the image of God, adhering to the teachings of Jesus to love and be kind to all, where no one is excluded, marginalized or treated cruelly because of who they are or whom they love.

My husband and I founded the Tyler Clementi Foundation to prevent bullying, including what happened to my son before he died. We hope to see a world where youth like Tyler are respected and treated with kindness – not only by their peers but by their churches.

I want parents to think about how our religious communities treat people who are different. Regardless of sexual orientation or gender identity, our children deserve to be taught about love and acceptance, not shame and rejection.

The choices we make about where our families worship can save lives. Don’t make those decisions lightly.