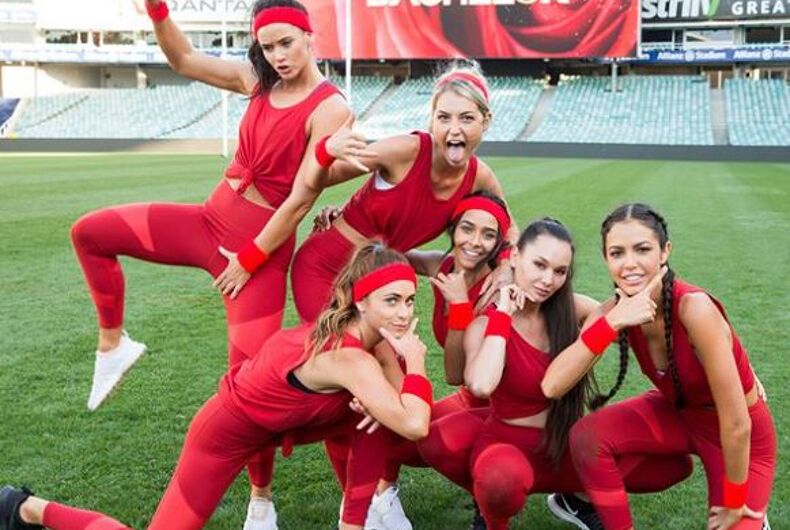 Brooke Blurton recently came out as pansexual during an episode of The Bachelor and now her sexuality has come back up for discussion by an unlikely source.

Bachelor In Paradise contestant Blake Colman revealed that he used to date the 23-year-old until she turned “full lesbian,” as he phrased it.

“It now the right time to let you know that I was dating Brooke during the exact moment she decided to turn full lesbian?” he asked. “I literally have no hope with women. Just for the record, she is a dope chick and a really good human.”

And then he said, “But guys you have not felt pain and confusion until a girl leaves you for a girl.”

Pansexuality is defined as being attracted to the person, not their gender.

“It’s the person that you’re thinking about,” Sexologist Tanya Koens explained to Marie Claire. “People like to put others into categories and boxes because we’ve lived in a very binary world for so long, but pansexuality is not saying you’re attracted to gender or orientation, it’s saying you’re attracted to people, regardless of whether they’re a man, a woman, gender-expansive or transgender.”

Blurton received heat because she vehemently denied she was a lesbian.

Pansexuality is different to being bisexual or lesbian. She validated the experiences of pansexual people by explaining the difference #TheBachelorAU #BachelorAU

For his part, Colman told Mamamia that his words were taken “out of context.”

“The amount of reporters DM’ing me about this is, only to focus on me saying she was a lesbian is alarming,” he said. “At the point in time when me and her were dating, she decided to turn gay, at that point in time she obviously was figuring things out as any woman or man should at that age.”

He went on, “Many years later she actually started dating another guy, so therefore there is no need for everyone to focus on ‘what sexuality she is’. In our society in the present day it’s a joke when everyone is trying to pinpoint someone’s sexuality like Brooke’s.”

He continued speaking for her.

“She is bi, everyone should get over it,” he said. “I have soo many friends in the gay community it’s not even funny, hence why my comments are not a big deal.”

Thinking of attending Yale? You might just fit in more if you’re LGBTQ vs. conservative