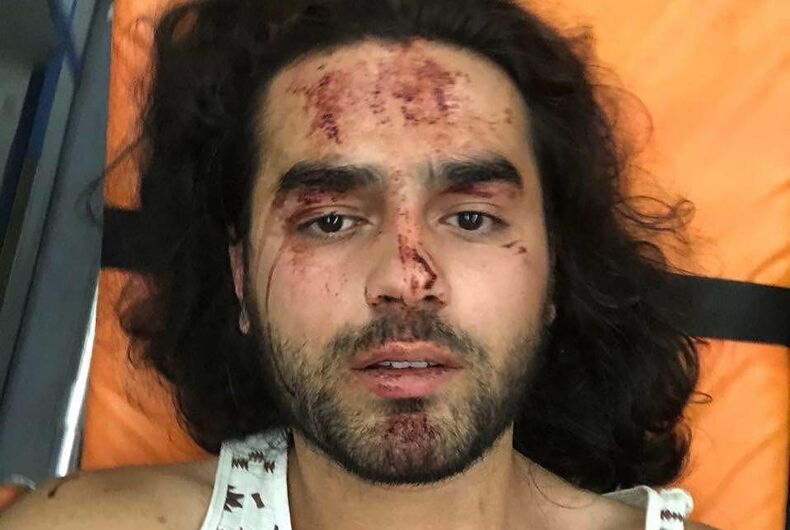 One of the injured activists beaten yesterday in the village of Shurnukh, Armenia.Photo: Facebook/Gay And Lesbian Armenian Society

In a scene straight out of the Middle Ages, dozens of villagers in Armenia’s Syunik region formed a lynch mob to attack the town’s LGBTQ citizens. Multiple victims were hospitalized.

Over 30 men, women and children from the village of Shurnukh – including the former mayor – viciously beat the men and chased them out of the town. Victims report that police took over an hour to respond as the night of horror continued.

Radio Free Europe reports that two men confronted the group at one of the victim’s home, shouting homophobic slurs and threats of violence. The activists quickly packed their bags to leave before the men could return, but by then the lynch mob had formed and was on their doorstep.

“In the beginning, they were just shouting that homosexuals can’t live in this village, but it became violently very fast. We started running for our lives,” Hakobyan said according to Bonny. “They followed us and started to beat us up and throw rocks. We all got hurt, but two of my friends are seriously injured and had to go to the hospital immediately.”

Hakobyan also told Bonny that the former mayor was part of the mob and police took over an hour to respond to the ongoing violence. The men were able to record portions of the attack.

“We had to wait for more than an hour for them to show up. But we are hopeful that the attackers will be punished since we recognized a lot of them and we were also able to somehow film them,” Hakobyan said.

Pink Armenia posted on Facebook that nine people were sent to the hospital for various injuries.

“We are calling upon the police officers of Goris Police firstly to ensure the safety and security of the activists, as well as undertake the appropriate measures to find and prosecute the perpetrators,” the group said in the post.

🏳️‍🌈🇦🇲 9 LGBTI People got attacked by 30 villagers in a small Armenian village. 2 of them are seriously injured. This is something that should not be happening in the 21st century. Fortunately, this people can still tell what happened. Let's commemorate all those who can't! pic.twitter.com/AeKhAAxEga

Here is a photo of one of the injured activists beaten yesterday in the village of Shurnukh, Armenia..#HateCrime #Homophobia #Ignorance #Violence #HumanRights #LGBTRights #GayArmenia #GayArmenian PINK Armenia

Posted by Gay And Lesbian Armenian Society on Saturday, August 4, 2018

BREAKING: Today, on the 3rd of August, around 20:00, in Shurnukh village, Syunik region, more than 30 people attacked 9…

Editor’s note: This story has been updated. In the age of fake news, we cited British news outlet Gay Star News but noted they didn’t name their source for the interview with Hayk Oprah Hakobyan. Belgian activist and journalist Rémy Bonny conducted the interview for his own site.

These best friends pretended to be a straight couple for years. Now they had a double wedding.