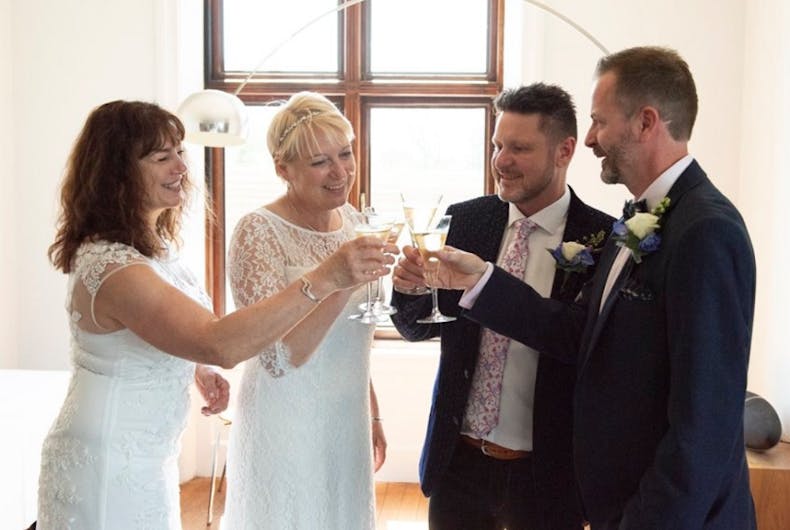 Gail Langan and Mark Sully became best friends 33 years ago while serving in the United Kingdom’s air force, and they pretended to be a straight couple.

Now they’re each marrying someone for love.

Before 2000, LGB people were banned from serving in the UK’s military. So when Gail and Mark met in 1985, they were both keeping their identities secret.

“It was illegal to be gay in the air force and we could have been thrown out so Gail and I allowed people to believe we were girlfriend and boyfriend,” Mark said. “It was hard to hide our sexuality but we knew people that had been thrown out.”

Several years later, when they got out of the military, each of them came out to their parents. Mark’s parents were more accepting, but Gail’s came around eventually.

“Coming out to my parents was tough,” she said. “It carried a stigma and my mum feared what people would think. But now she stands for gay rights.”

In the years that followed their military service, Mark worked as a chef on private yachts and Gail worked as a social worker. Mark’s work took him overseas, but when he came back home he would stay with Gail.

“We chatted for a few weeks and hit it off,” Mark recalled. “Then I got a call from Gail the next September saying she’d met someone too, someone I knew.”

Gail, 52, had met Olga, another social worker. And this past year they decided to get married.

There were a few jokes about a double wedding, nothing more, until Mark proposed to Barry this past August. Then they started planning a joint wedding.

“No one turned in to a Bridezilla and we split everything down the middle,” Mark said.

This past April they held a joint wedding in Cornwall. Each couple acted as the witnesses for the other couple.

“It was perfect,” they said. “We think the people wandering around outside the venue after thought we were two straight couples at first, then they realised, they’re two gay couples, which we thought was funny.”

“I got married with my ‘boyfriend,’ but not to him!” Gail said.

In May, they held a reception of 200 for friends and family.

“There is still a long way to go,” Mark said, referring to how he went from hiding his sexuality in the military to celebrating it at a wedding. “A lot of people now see homosexuality as the norm but there are plenty who do not. There is still discrimination.”

“We would not feel comfortable holding hands in public, for example,” he added.

Even though they have been doing a lot together, each of the couples will be taking a separate honeymoon.

“You’ve got to draw the line somewhere,” Mark said.