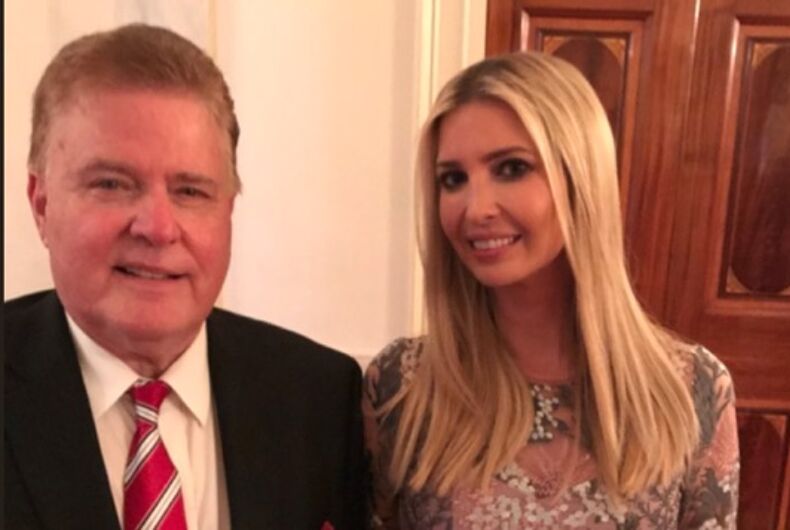 President Trump and Vice President Mike Pence held a “state-like dinner” at the White House last night to honor his base of hate group leaders and anti-LGBTQ crusaders.

The night was a who’s who of the most repulsive “Christian” leaders in the nation, but administration officials – including Ivanka Trump – smiled and posed for photos with people most Americans would shun.

In attendance were activist Jim Garlow, who has said that gay people are demonic, and megachurch pastor Robert Jeffress, who says Jews are going to hell because they killed Jesus, and infamous anti-choice activist Ralph Reed.

“This was actually the president and first lady’s idea to have a dinner to celebrate evangelical leadership,” Jeffress told the Christian Broadcasting Network before the event. “The White House is very aware that evangelicals have been some of the staunchest supporters of the president. He won by the largest evangelical vote in history. He still has a 77 percent approval rating and I think they’re genuinely appreciative of that.”

Honored to join @POTUS & @FLOTUS tonight at the @WhiteHouse to celebrate strong and inspiring evangelical leadership. This administration stands for protecting religious liberty for all & is grateful to faith leaders for their tireless service to their neighbors & communities. pic.twitter.com/jBx9a8TMI1

While the president’s evangelical base has left most Americans scratching their heads since the holier-than-thou set has traditionally made morality a hot button issue, they’ve been quick to push back with justifications for their unwavering support.

Appearing on Fox News, Jeffress explained the double standard. It’s political and not religious. People who point out the hypocrisy – as their savior did in the Bible – are only trying to undermine the government. That’s the same excuse that Jesus railed about when he drove religious leaders out of the temple.

“I know a lot of people are still perplexed- why are Christians so supportive of Donald Trump?” Jeffress said. “Well, it’s really not that hard to figure out when you realize he is the most pro-life, pro-religious liberty, pro-conservative judiciary in history and that includes either Bush or Ronald Reagan. I think that is why evangelicals remain committed to this president and they are not going to turn away from him soon.”

“To be fair, Shannon, we have to understand these are still allegations against the president, so I’m not going to judge the president on these things. But even if they were true, some of these allegations, I mean, obviously, we don’t support extramarital affairs, we don’t support hush money payments, but what we do support are these president’s excellent policies,” he continued. “And I think most thinking people can absolutely differentiate between the two.”

“And don’t be mistaking what is going on here. Those who hate President Trump, those on the left know that if they can dislodge his evangelical supporters from him, they have a shot at overtaking the White House. So I think the left is trying to shame people like myself continuously for supporting this great president. It’s not going to work. We’re not going to turn away from him.”

There’s no need for “the left” to condemn these hypocritical charlatans. Their God has already done it for us.

In the Christian Bible, Christ publicly indicted the temple authorities as “a den of robbers” for collaborating with a corrupt government. And after being invited to dine with a religious leader, his host castigated him for not washing up before eating. In response, Christ gave an impassioned rebuke that today’s version of the Pharisees should remember.

“Now you Pharisees clean the outside of the cup and of the dish, but inside you are full of greed and wickedness. You fools! Did not the one who made the outside make the inside also? So give for alms those things that are within; and see, everything will be clean for you.”

“But woe to you Pharisees! For you tithe mint and rue and herbs of all kinds, and neglect justice and the love of God; it is these you ought to have practiced, without neglecting the others. Woe to you Pharisees! For you love to have the seat of honor in the synagogues and to be greeted with respect in the marketplaces. Woe to you! For you are like unmarked graves, and people walk over them without realizing it.”

And before Jeffress can attempt to make further justifications for his ilk’s twisted leaders, maybe someone should remind him that Jesus was a Jew.