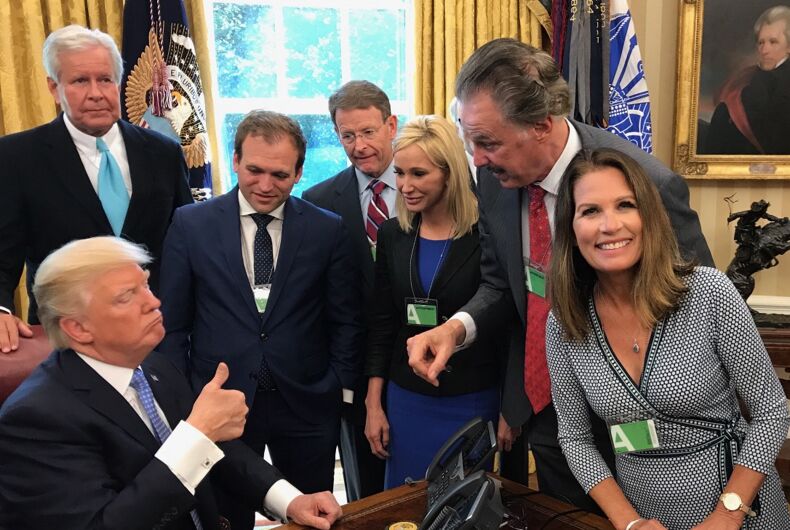 A watchdog organization has filed a lawsuit to get information from the Trump Administration about Bible study sessions that are being held for Cabinet members.

Conservative pastor Ralph Drollinger has been running Capitol Ministries since 2010 with the intent to influence U.S. representatives. In 2015, he expanded his ministry to include the Senate.

For the past nine months, the People for the American Way (PFAW) says that they have been trying to get the Trump Administration to release information about these Bible study meetings under the Freedom of Information Act (FOIA).

They asked for “documents including correspondence, call logs, and meeting records related to Ralph Drollinger, Danielle Drollinger, and other Capitol Ministries personnel.”

“The president’s team seems to think that the Freedom of Information Act does not apply to them, and they are wrong,” PFAW’s Elliot Mincberg said.

“Cabinet officials have every right to participate in Bible study, and the American people have every right to know who is influencing public officials and how,” Mincberg said. “We made a proper request to find out more details about this religious instruction and influence campaign, and the Trump administration ignored it. That’s a clear violation of FOIA, and we expect the court will agree.”

Drollinger hasn’t been shy about his influence in the White House. He told the BBC that the idea came from some of the Senators who were in his Bible study when they got appointed to the Cabinet.

He added that Donald Trump doesn’t attend the Bible study meetings, but he does receive a weekly eight-page printout from them each week.

“He writes me back notes on my Bible studies,” Drollinger said.

“He’s got this leaky Sharpie felt-tip pen that he writes all capital letters with. ‘Way to go Ralph, really like this study, keep it up.’ Stuff like that.”

In a 2015 interview, Drollinger described Capitol Ministries as a “factory” to produce politicians like Michele Bachmann.

“She doesn’t need a whole lot of time to figure out how to vote because she sees the world through a scriptural lens,” he said. “We need more men and women like her in office.”

Drollinger is a climate denialist and doesn’t like Islam or Catholicism, calling the latter the “world’s largest false religion.” He compared people seeking asylum in the U.S. to “thieves or murderers” to justify the Trump Administration’s child separation.

Of course, he doesn’t like LGBTQ people much. He has called homosexuality an “abomination,” calls anti-LGBTQ discrimination a “God-given right,” and said that the “ultimate outcome” of LGBTQ equality is “the discontinuation of the species since homosexuals cannot procreate.”

A gay student was found burned & beaten in May. Now Congress wants answers.