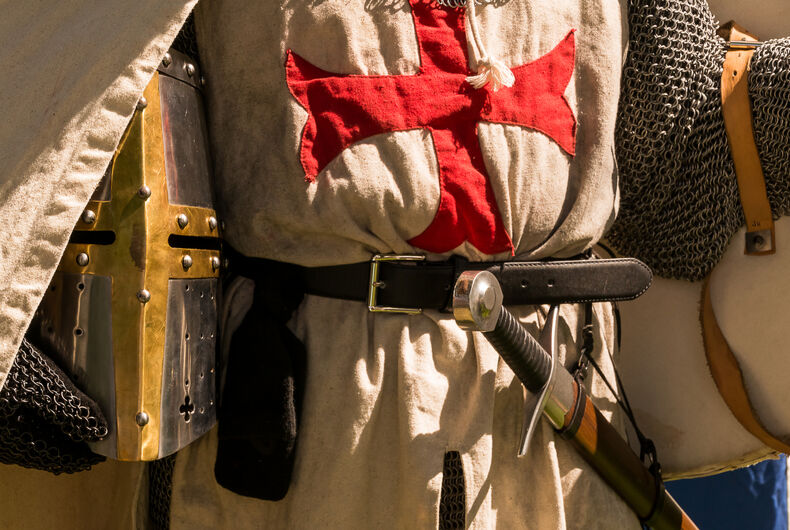 Pope Urban II summoned the First Christian Crusade in Clermont, France to “liberate” Jerusalem from Muslims. In the summer of 1096, as the Crusade began, they murdered several thousand Jews along their way in the lands along the Rhine River, looted, and destroyed their homes.

They accused Jews as being treacherous auxiliaries of Muslims. According to a Crusader under Pope Urban II’s order, “Let us first avenge ourselves on them [the Jews] and exterminate them from among the nations so that the name of Israel will no longer be remembered, or let them adopt our faith.”

One Crusader, an eyewitness to the event, wrote, “Men rode in blood up to their knees and bridal reins. It was a just and splendid judgment by God that this place would be filled with the blood of the unbelievers.”

The Crusades lasted from the 1090s till 1350. By 1204, however, the tide began to turn against the Western European invaders, as the Mamluk dynasty in Egypt drove them out of Palestine and Syria.

Beauregard’s unstated but obviously intended aim is to target LGBTQ people for codified discrimination throughout the land by murdering several democratic institutions along the way –  including, but certainly not limited to, the Fifth and Fourteenth Amendments of the Constitution in their stated guarantees of “equal protection” and “due process” under the law.

When Donald Trump was running for the Republican presidential nomination, he chose Indiana Governor Mike Pence, an infamously-known political commodity who fired the first salvo in the “Religious Freedom Restoration” movement for a Trumped-up war against Christians.

Pence signed into law legislation permitting businesses to refuse service to LGBTQ people and members of all other groups that owners considered heretical to their beliefs, judgments, and precepts that violated their “deeply-held religious beliefs.”

Since then, this expanding movement has gained support in state houses across the country as exemplified in Mississippi’s “religious freedom” law patterned after Indiana.

In 2016, North Carolina passed its HB 2, the Public Facilities Privacy & Security Act, which includes a section that prohibits trans people the ability to enter a restroom facility that differs from the sex assigned to them on their birth certificate.

Trump, by choosing Pence, added LGBTQ people to his already long list of “infidels,” which includes Mexicans and Latino people, Muslims, most immigrants of color, people with disabilities, women, plus anyone who supports the “Black Lives Matter” movement.

With Pence, Trump double-downed in his desire to divide and conquer the electorate by instilling fear in promising the bigoted the “freedom” to discriminate without threat of prosecution.

Recently, in a 7-2 ruling, the Supreme Court came down on the side of the owner of Masterpiece Cakeshop, Jack Phillips, who refused to bake a wedding cake for a same-sex couple in Colorado on “religious grounds.” When pressed by Michael Shear, a reporter for The New York Times, at a White House press briefing, Sarah Huckabee Sanders asserted that the President considers it fine for businesses to hang a sign in their window saying they won’t serve gay people.

Though the Trump administration had hoped the ruling would apply “religious freedom” (to discriminate) nationwide, the decision was limited in scope to this one baker. The case, however, cleared the legal path for the “Justice” Department to advance its cause, supported by conservative Christian nationalist groups, at the expense of others’ civil and human rights.

Trump has been perfectly clear where he stands on matters of “religious liberty and freedom” even before he read his dictum to ban Muslims from entering the country at a campaign rally. While Franklin Roosevelt declared war on Japan on December 7, 1941, Donald Trump declared war on Islam on December 7, 2015.

“Donald J. Trump is calling for a total and complete shutdown of Muslims entering the United States until our country’s representatives can figure out what the hell is going on,” he said, adding the word “hell” for special emphasis to his written remarks.

Trump has attempted to appease his base of supporters, especially conservative Christian Evangelicals, with his continuing attacks on Muslims in its various incarnations of executive orders, plus his numerous other accommodations including spouting off that “we can say ‘Merry Christmas’ again” because he bravely defeated the supposed “War on Christmas” waged by Barack Obama.

Ultimately, though, Trump “found Jesus” to divert supporters’ attention from the Mueller investigation – that by all indications has been traveling in increasingly closer concentric circles around the White House.

Trump, through Pope Beauregard, has declared a crusade on the rights of LGBTQ people to serve as his protective fire wall to keep the investigators from breaching his self-imposed borders.