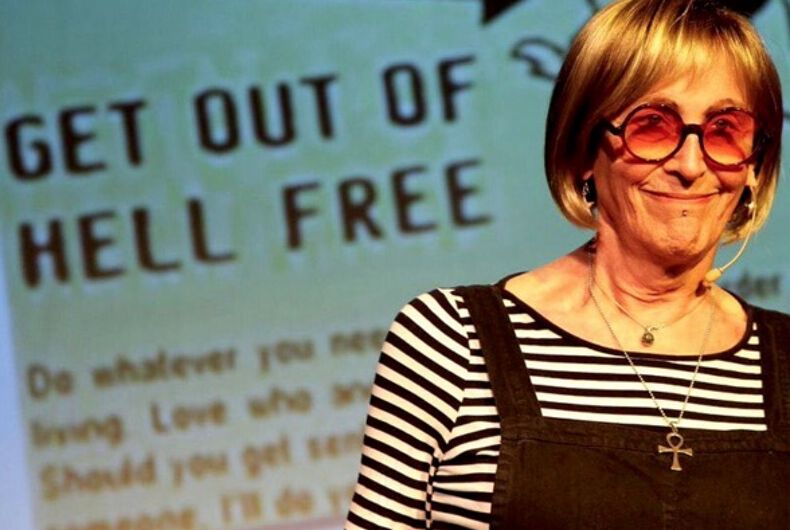 Kate Bornstein on stage performing during "On Men, Women, and the Rest of Us" at La Mama theater.Photo: Instagram

At the beginning of the Wednesday night performance of the Broadway play “Straight White Men,” trans performer and long time trans activist Kate Bornstein faced a heckler in the audience.

“It’s true what people are saying: a woman, in response to my opening line of the show, ‘Good evening, ladies, gentlemen, and the rest of us,’ called out from the audience ‘You’re not welcome here,'” said Bornstein on her Facebook page.

In the play, Bornstein and co-star Ty Defoe, a two-spirit performer, are there to help guide people through the show. The two usually spend a half hour or so before the show ad-libbing with the audience before the performance begins in earnest.

After the outburst, Bornstein’s co-stars took to social media to express their opinions about the heckler. Armie Hammer, one of the leads for the play, was the first to take to Twitter.

“To the woman in our audience who felt it was appropriate to yell, “You’re not welcome here!” at Kate Bornstein, our beloved friend, co-worker, and now family member….. Feel free never to come back,” said Hammer.

To the woman in our audience who felt it was appropriate to yell, “You’re not welcome here!” at Kate Bornstein, our beloved friend, co-worker, and now family member….. feel free never to come back.

And also feel free to go fuck yourself lady. https://t.co/bKSO5MPxB0

The heckler was apparently not removed, according to a report from audience member Amy Spiegel. She and others attempted to quiet the heckler with others in the audience, who she said were also “booing loudly.”

Bornstein took a different tack than her co-stars, choosing to respond out of love.

“I’ve been chewing that over, and the best I can come up with is that one of her children or grandchildren has gone through a gender transition that troubled her greatly, to the point that she just boiled over when I took the stage,” said Bornstein.

“Look, ‘Straight White Men’ is a great work of art. And great art does upset people. It happens all the time. Please know that I’m not upset, or afraid. I’m more than ever proud to be part of this show,” She added.

Bornstein also spoke directly to the heckler’s insistence that she was not welcome to be a part of the performance.

“She could not have been more wrong. The cast, crew, and company of ‘Straight White Men’ have been warm, welcoming, and inclusive of me and the other trans actors in the show, Ty Defoe and T.L. Thompson. The production company, Second Stage Theater, have only expressed delight in welcoming us aboard. And the staff of the Helen Hayes Theater could not be more welcoming — we all of us give and receive nightly hugs,” Bornstein said.

“Straight White Men” is about three sons who visit their widowed father over the Christmas Holiday, and focuses on the nature of male privilege.

While “Straight White Men” is Bornstein’s Broadway debut, she is no stranger to the stage, having written and performed in a number of shows over the years. It is playing at the Helen Hayes Theater.

Dr. Pepper came out as ‘queer’ in shocking new ad & the internet lost its mind