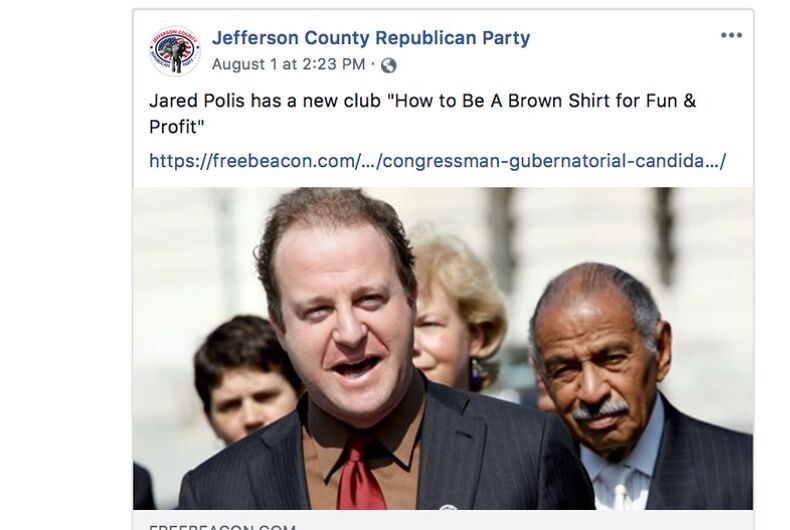 In a post to Facebook on August 1, the Jefferson County, Colorado, Republican Party made a joke about Representative Jared Polis (D-CO) being a Brownshirt – an informal name for a member of the Nazi Party’s paramilitary, which was known for their violence against opposing parties and minorities, like Jews and gay men.

Polis is Jewish. And gay.

“Jared Polis has a new club ‘How to Be A Brown Shirt for Fun & Profit,” the post said, along with an image of Polis wearing a brown shirt.

“The Nazis example should teach Dems like Maxine Waters one thing. Today’s button pushers can become tomorrow’s targets. The Brown Shirts (SA) harassed others until Hitler did away with them in the Night of the Long Knives. When one group is unsafe then no one is safe. We should not tolerate this sort of behavior in America.”

“Who can even take them seriously?” he wrote on Facebook. “They have nothing to offer to any logical discussion of ideas. They are in the political arena just to cause chaos — like Hitler’s Brownshirts.”

The post about Jared Polis has been taken down. The Jefferson County Republican Party has not commented on this matter.

Trans performer Kate Bornstein heckled on Broadway, but the response will warm your heart