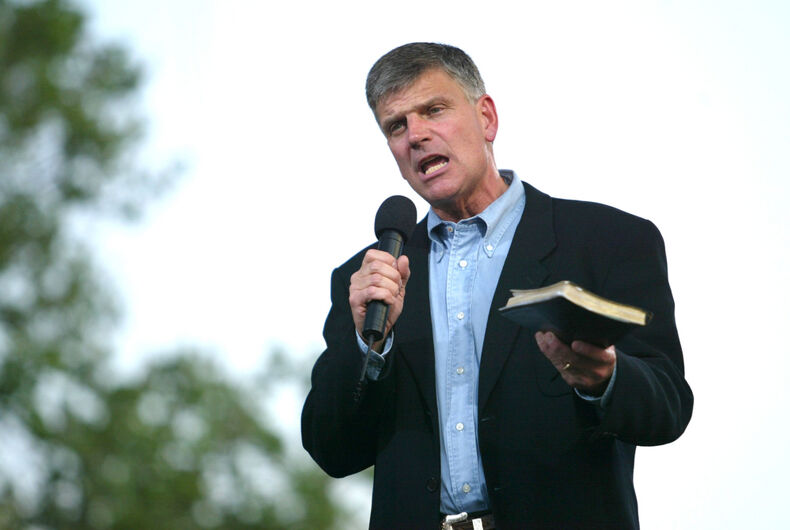 Sometimes a doughnut is just a doughnut. But tell that to the denizens of the fringes of the web.

Having convinced themselves that Hillary Clinton’s operatives were running a child sex-slave operation out of a pizza parlor in DC, they have now moved on to a doughnut shop in Portland, OR. This time, evangelist and Trump booster Franklin Graham is among the supposed perpetrators.

The bakery in question is Voodoo Doughnuts. In inimitable Portland fashion, Voodoo likes to produce outrageous confections. Besides the usual glazed doughnuts, the shop specializes in hipster crullers that pay homage to cannabis (Grape Ape, Maple Blazer Blunt) and childhood breakfasts (doughnuts decorated with Cap’n Crunch or Froot Loops). There’s also a Gay Bar, decorated with colors of the rainbow/

But it’s the doughnuts with a sexual twist that is driving conspiracy theorists off the deep end (well, even further off the deep end). Voodoo produces a Cock-N-Balls doughnut that looks exactly like what it says it does and is cream-filled. There’s also Salty Seamen, Chocolate Hole and Triple Penetration.

Then there’s the doughnut the shop is named after, which is a scary voodoo doll, chocolate-covered and also cream-filled, with some squiggles that fantasists see as code messages.

The store’s motto is also a source of frantic code-breaking by the tin-foil-hat brigade: “The magic is in the hole!”

The attacks on Voodoo Doughnut began when someone named Mike Whelan went on YouTube and insisted that he “was made aware of people that were participating in sexual abuse and trafficking of children in the city of Portland, OR.” In the video, which has 70,000 views, Whelan claimed he saw children being taken into the home of Voodoo Doughnut’s owner where “there was abuse of children going on.”

None of this has any basis in fact. But that hasn’t stopped the conspiracy from spreading to encompass, of all people, Graham.

According to an even fringier site out of Australia, Graham is part of the conspiracy, having posted a Twitter photo of himself in Portland enjoying Voodoo’s doughnuts. The site, run by someone who insists she was abused by Graham’s father, Billy Graham, says that Franklin supports the sex-ring operation supposedly run out of the store. (The site falsely claims that Voodoo was busted by the FBI in 2016.)

“The timing of this tweet struck victims of ritual abuse and mind control as no coincidence, and many immediately concluded that Franklin Graham’s tweets were his publicly declaring, ‘I stand with these Luciferian pedos!’,” the site declares.

The psychology behind sites alleging mind control and paranoid conspiracies is best left to behavioral health experts. But the worrisome thing is that social media allows such craziness to blossom by allowing like-minded crackpots to gather together. #Doughnutgate is trending on Twitter.

The episode might be funny if it weren’t for the actual harm that accompanies it. Not only is the business being harassed, but it’s probably only a matter of time that people who work there start getting threats as well (if they haven’t already).

There is also the real threat of physical violence. A man “self-investigating” the crazy pedophile claims against the DC pizzeria fired an assault rifle in the restaurant before being apprehended by police.

Graham will likely escape the latest conspiracy theory. But there is a certain justice in his being caught up in it. After all, Graham has dabbled in crazy conspiracy theories himself. In 2011, he suggested that President Obama had “some issues to deal with” because he wouldn’t release his birth certificate.

For the record, Obama had done so, three years earlier.

Will Roseanne be dead in new ‘The Conners’ spinoff?