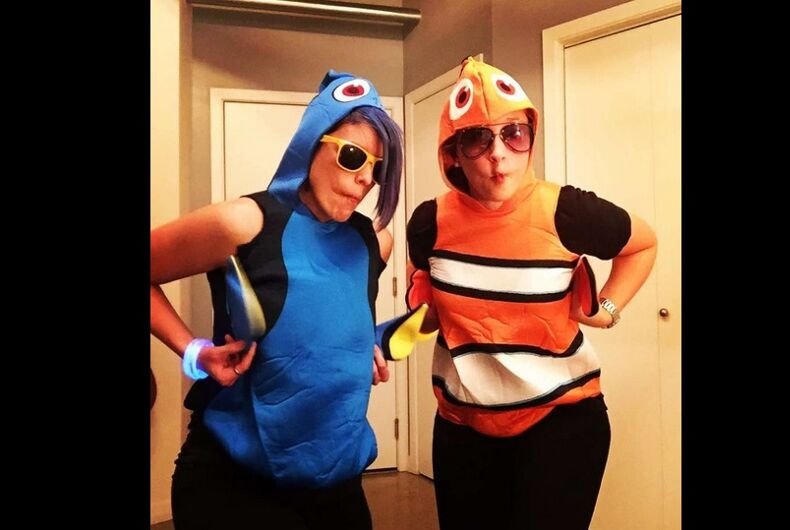 A lesbian elementary school teacher who was put on leave for coming out to her students has been transferred to a high school.

Stacey Bailey taught art at Charlotte Anderson Elementary School in Arlington, Texas, until this past year.

She says that at the beginning of the school year, she showed pictures of her family and friends to help the students get to know her. One of the pictures showed her and her fiancee dressed up as characters from Finding Nemo.

A parent complained to the school that she was advancing the “homosexual agenda.” The school administration had a meeting with her and told her to “be mindful of what you say” and that they work in a “conservative community.”

Later, she was teaching a fourth grade class about certain artists, and she mentioned that Jasper Johns is gay. One of the students said “eww,” and Bailey told the kid that that’s not respectful.

This upset a parent, who believed that disrespecting LGBTQ people is key to preventing kids from turning out gay.

“She said the artists are gay. A student said ‘eew.’ The teacher said don’t say that is eew. I am gay and that hurts my feelings if you say eew,” the parent said, according to school records.

“I am afraid the girls love the teacher so much that someday they will want to do that. Kids do what the teachers do because they respect them.”

In September, she was placed on leave, and she couldn’t get work elsewhere because she was on leave. So she filed a federal lawsuit.

This past March, the school put out a statement confirming that she was suspended because she “insists that it is her right and that it is age appropriate for her to have ongoing discussions with elementary-aged students about her own sexual orientation, the sexual orientation of artists, and their relationships with other gay artists.”

“Parents have the right to control the conversation with their children, especially as it relates to religion, politics, sex/sexual orientation, etc.,” the statement said.

Bailey’s attorney said that she has every right to talk about her family, just like straight teachers do.

“For Stacy, this entire ordeal began when she spoke with the students about her family which, for Stacy, included her wife,” her attorney said in a statement. “The District appears to speak for Stacy when it states that she ‘insists it is her right and that it is age appropriate’ to discuss matters including ongoing discussions about her own sexuality. This is absolutely false. Further, she never received directives to change her behavior–and never refused to follow any directive.”

Now she’s been assigned to Lake Ridge High School in Mansfield, Texas, a move that her lawyer said is intended to get her to quit.

“Stacy’s new position comes with a much greater workload and learning curve given her only experience has been with elementary school students,” he said.

She was also assigned large classes.

Her lawyer said that Bailey would be starting the school year with her colleagues this Wednesday.

This Disney movie will include the studio’s first gay character. Played by a straight man.