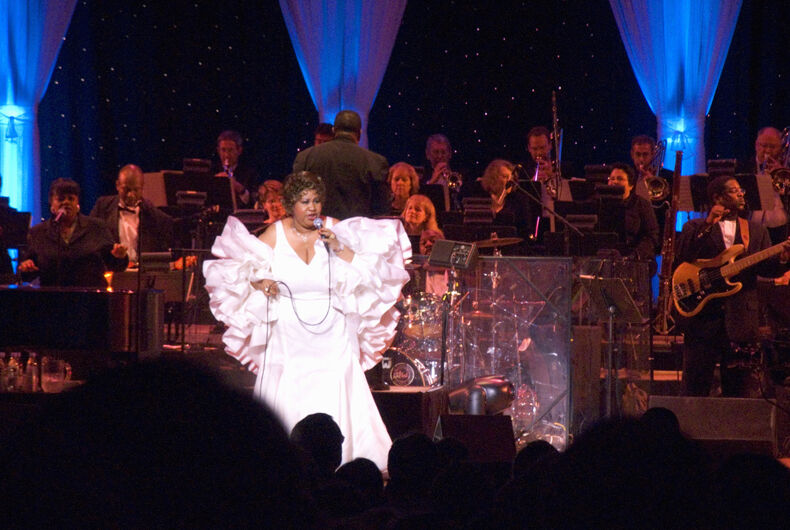 Aretha Franklin performing at the celebration for the official opening of the William J. Clinton Presidential Library November 18, 2004 in Little Rock, AKPhoto: Shutterstock

Aretha Franklin, the Queen of Soul and a longtime gay icon, has died at the age of 76. Franklin had battled cancer for years.

She was surrounded at home by family and friends when she passed away at 9:50am, according to CNN.

The “official cause of death was due to advance pancreatic cancer of the neuroendocrine type, which was confirmed by Franklin’s oncologist, Dr. Philip Phillips of Karmanos Cancer Institute in Detroit,” according to a family statement.

Her last public performance was in late 2017 at a benefit for the Elton John AIDS Foundation.

She announced last year that she would be retiring from touring following a few dates in support of her latest album. She was forced to cancel several concerts recently on her doctor’s orders.

Franklin’s family confirmed that she was “gravely ill” earlier this week.

“In one of the darkest moments of our lives, we are not able to find the appropriate words to express the pain in our heart. We have lost the matriarch and rock of our family. The love she had for her children, grandchildren, nieces, nephews, and cousins knew no bounds,” her family said in the statement.

‘Fox & Friends’ called a woman ‘that transgender.’ The dictionary corrected them.