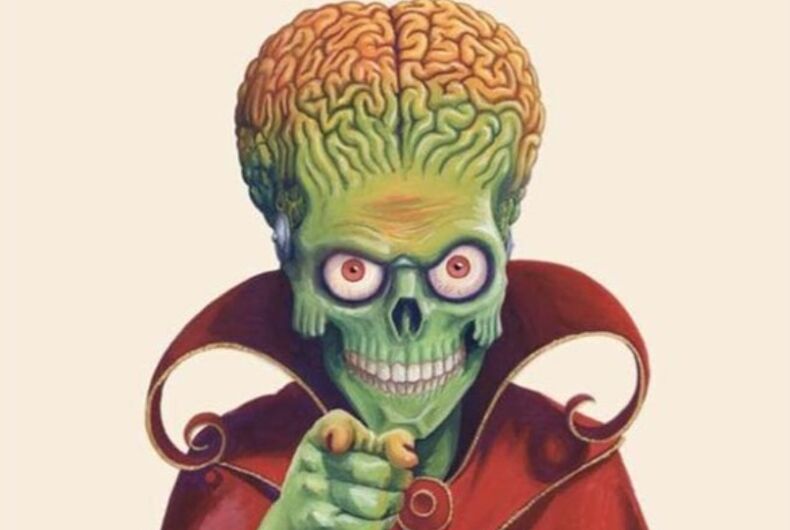 Vice President I-Hate-Homos Pence announced that President Bone Spurs will launch an entirely new branch of the military industrial complex, which the regime is calling its “Space Force.” Its intended purpose is to ensure this country’s continued strategic military dominance not only on planet Earth, but ultimately throughout the outer reaches of the galaxy and beyond.

Though offensive and defensive military policies, procedures, and actions exist already under the auspices of the Department of the Air Force, military officials thought it better not to inform Trump personally of this.

First, they assumed Trump and his advisors would have known this, and second, they did not wish to experience exploding ballistic missiles from the Commander-In-Chief’s muscular Twitter finger, that tiny but most developed part of his anatomy.

Initially, the regime intends to spend upwards of $8 billion to place the new Space Force on the launching pad, with skies-the-limit funding taking off soon thereafter as long as Republicans hold the Hill.

Just think of it, “Star Wars” will fade into distant memory as a successful Hollywood movie franchise, and future generations will hunt down the real Darth Vader in exhilarating warp speed.

Put down those video games. Along with our great allies from the Russian Federation, be the first on your block to defeat our staunch nemeses in space: Canada and France.

One of Trump’s first and foremost goals is to have the Force be with him in constructing a big and beautiful wall completely surrounding the Earth to repel illegal Martian aliens from infesting our planet, which Mars will pay for.

Forget the fact that Puerto Rico still needs to repair its power grid, or that residents of Flint, Michigan need $50 million to replace its crumbling water pipes. Forget that over 500 migrant children are still illegally separated from their parents and their chances for life-long traumatic impact increases by the day.

Forget that the wealth gap is increasingly expanding even more since the Trump-Republican tax scam for the rich passed Congress, and in all likelihood, average tax payers will have to finance this farce in space.

Forget that global climate changes imperil every living species on Earth even as Trump’s Department of Energy, “Justice” Department, and, ironically, Environmental Protection Agency’s policies favor corporate and individual polluters at the expense of future generations.

The Trump regime shows considerable interest in promoting military security throughout intergalactic systems in space, but little concern for our vulnerable porous electoral systems – the political basis of our republic.

But priorities are priorities. Now the Trump regime and its policy makers will not have to limit themselves to destroying the climate and material environment of the third planet from the Sun. Now it will have the universe to dump its toxic garbage and to destroy at its pleasure.

Just think of the possibilities.

Why is Judith Butler trotting out tired excuses to defend a sexual harasser?