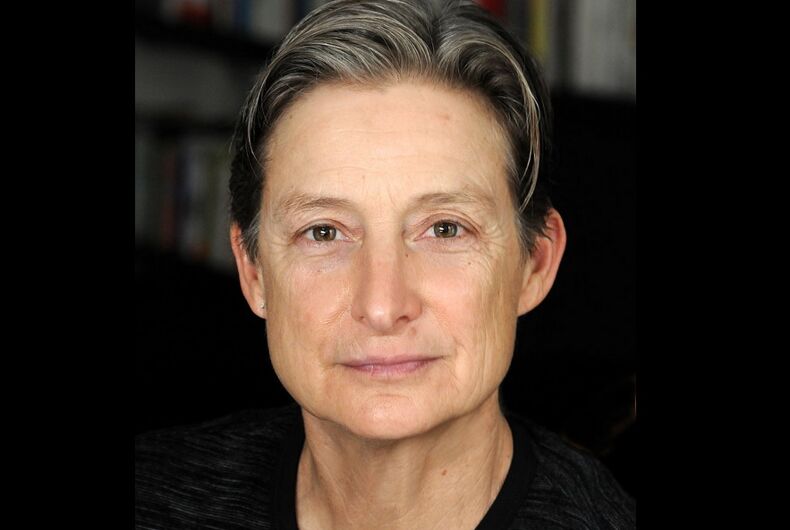 Judith Butler is known for her innovative approach to gender theory and queer studies, but a letter she signed in defense of professor who was found guilty of sexual harassment has many wondering why she’s relying on such tired clichés.

Avital Ronell, a well-known literature professor at New York University, has been suspended after an 11-month investigation into sexual harassment allegations made against her by a gay graduate student.

Nimrod Reitman, the student, filed a Title IX complaint against Ronell, accusing her of insisting that they share a bed, pressing her butt up against his groin, making lewd comments like calling him “Sweet cuddly Baby” and “cock-er spaniel” in emails, and generally using her power over him in a way that’s inappropriate.

After he came forward with his accusation, NYU conducted an investigation and found Ronell responsible for physical and verbal sexual harassment that was “sufficiently pervasive to alter the terms and conditions of Mr. Reitman’s learning environment.” She has been suspended for a year.

Professors wield enormous power over the futures of graduate students, so it’s unfortunate – but not exactly surprising – that a professor would use that power to sexually harass a student.

It’s perhaps even less surprising that other professors have come to the defense of Ronell, who has been described as “one of the very few philosopher-stars of this world,” writing a letter to the president of New York University on her behalf.

The first signature on the letter is Judith Butler’s, the author of Gender Trouble and Bodies that Matter.

The letter opens with the honest admission that the writers don’t have access to the confidential dossier that NYU’s investigation produced. Since they are academics whose careers are based on backing up their statements with evidence, that’s where the letter should have stopped.

But instead it cuts straight to the point and accuses Reitmen of waging a “malicious campaign” against Ronell. The professors then “deplore the damage” that the investigation did to Ronell’s reputation.

“There is arguably no more important figure in literary studies at New York University than Avital Ronell whose intellectual power and fierce commitment to students and colleagues has established her as an exemplary intellectual and mentor throughout the academy,” the letter says.

The letter says that there is no “actual evidence” against her, even though they admitted that they don’t know what the evidence even is.

The letter concludes by saying that the “the keen wit, and the intellectual commitment” of Ronell entitle her to “the dignity rightly deserved by someone of her international standing and reputation.”

Of course, in a Title IX investigation, someone’s “keen wit” and “intellectual commitment” entitle them to nothing. And the “dignity rightly deserved by someone of her international standing and reputation” is usually a tool used by a harasser to keep accusers from coming forward and to get out of the consequences of their actions.

If the letter’s signatories had any exculpatory evidence when it comes to the specific accusations made by Reitman, they failed to include it. Instead, they are basically saying that a world-famous professor is simply worth more than a graduate student, so she should be allowed to harass as she pleases.

That’s not how the letter-writers see it. Diane Davis of the University of Texas-Austin told the New York Times that Title IX has been “twisted” in this case.

“I am of course very supportive of what Title IX and the #MeToo movement are trying to do, of their efforts to confront and to prevent abuses, for which they also seek some sort of justice,” she said. “But it’s for that very reason that it’s so disappointing when this incredible energy for justice is twisted and turned against itself, which is what many of us believe is happening in this case.”

Of course, if Ronell were not an influential academic, then these people would not have written a letter on her behalf. That’s the nature of power – people who participate in maintaining a system of power often genuinely believe that their actions are justified.