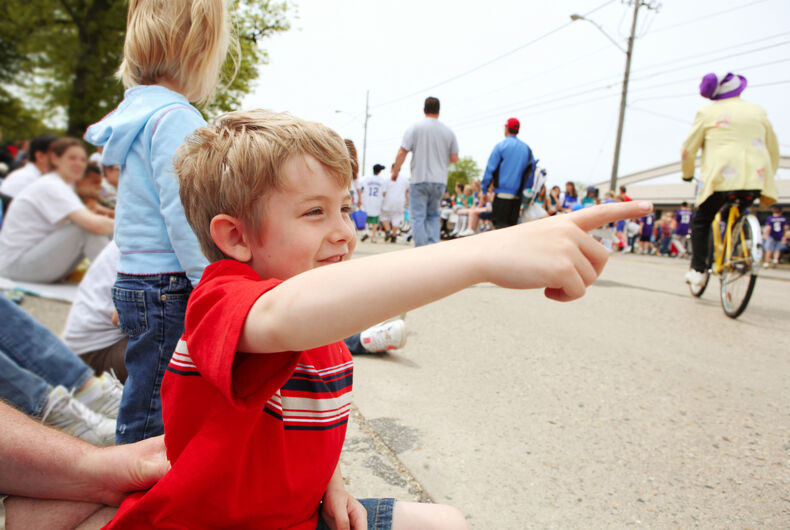 The Holiday Caravan Parade is an annual Thanksgiving tradition in Spencer, North Carolina, and the neighboring town of Salisbury. Or, at least it was an annual tradition until organizers decided that LGBTQ families weren’t welcome to participate.

Last year, parade organizers banned a float sponsored by AVITA Pharmacy because the company invited members of the local PFLAG chapter to ride and march with them. Donna Brown Odrosky, president of the chapter, said at the time that organizers objected to their rainbow paraphernalia and black PFLAG t-shirts.

Organizers said that the pharmacy violated the rules by allowing another group to advertise their message with “signage, apparel, fliers” without prior approval. But after Odrosky accused them of discrimination, the organizers got an earful from outraged residents and from around the nation.

Now they’re blaming the response they got to their decision to ban the LGBTQ group for canceling the 58-year tradition altogether. The thin-skinned organizers would rather shut it down than ensure that everyone was welcome to join them.

A statement on the parade’s website says that “since last year’s parade the all volunteer board members have received hate mail, emails, and threats to protest the 2018 parade to not only their personal email addresses, home addresses, social media but also to their place of employment.”

“These board members have dedicated their entire lives and heart to this event each and every year, some of them for over 30 and 40 years!”

Residents reacted with sadness and outrage that organizers were pulling the plug instead of promising to do better by the community.

“Since the incident in November 2017, PFLAG has asked for, and welcomed a dialogue with the Holiday Caravan board, to no avail,” Odrosky told the Charlotte Observer.

“It has always been our vision at Salisbury Rowan PFLAG to have “a world where diversity is celebrated and all people are respected and affirmed inclusive of their sexual orientation, gender identity, and gender expression,” she said. “…We look forward to working with a future parade committee whose mission and vision more closely aligns with PFLAG, the cities of Salisbury and Spencer, and event sponsors.”

The pharmacy also expressed regret that the organizers decided to cancel the annual event.

“Avita Pharmacy is deeply saddened to see this community become so divided through this situation,” the company wrote on Facebook. “We would love to see the Holiday Caravan parade carry on its long tradition of fun and celebration for the families of Salisbury and to do so in a manner that is welcoming and inclusive of all groups who represent the beautiful and diverse community of Salisbury.”

“We empathize also with the citizens of Salisbury in their disappointment over this decision by the Holiday Caravan board members and urge Holiday Caravan to reconsider its decision to cancel this long-held and valuable community tradition.

“It is our belief that even in times of conflict, communities can and should work together to find common ground for the betterment of everyone.”

In 2011, an anti-gay activist filed charges against a 74-year-old woman for giving him a hug while he protested outside a pride event in Salisbury. He claimed the woman sexually assaulted him by kissing him.

“He was just waving his arms and has a Bible in one hand, up and down, and screaming at the top of his lungs, ‘sodomites’ and ‘you’re going to hell,’” Joan Parker said at the time. “I thought he needed a hug. So I gave him a hug.”

“He claims I kissed him on the lips, and he’s a damned liar.”

The preacher contended the kiss “was just one of many attempts to silence the preaching to those in need of salvation who practice a death style that they call a lifestyle.”

Is it time for a heterosexual pride parade to help straight people feel safe?