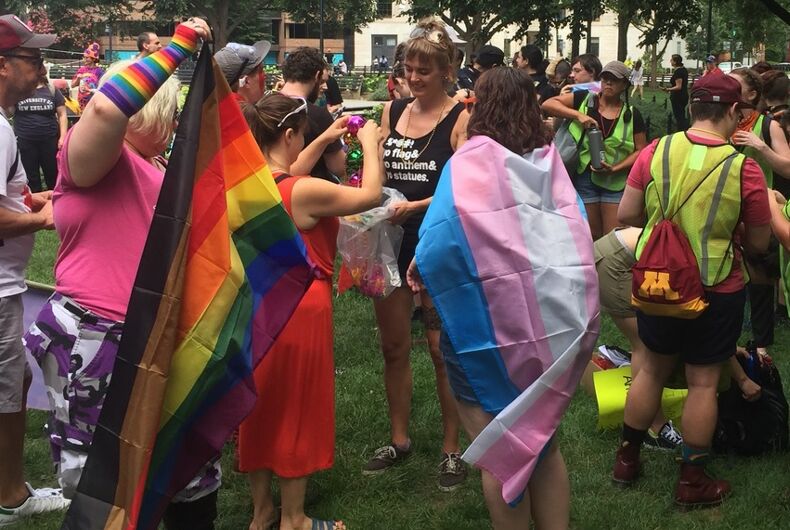 For the right, the white nationalist rally planned for yesterday was an epic failure.

But for humanity in general, it was a big success.

About two dozen racists showed up in D.C. on the anniversary of last year’s Charlottesville, Virginia, protest that resulted in one death.

This year’s march – Unite the Right 2 – was a lot smaller. Attendance was far short of the “hundreds” of people organizer Jason Kessler was expecting in his application for a permit.

The few rightwingers who showed up weren’t doing movement conservatism’s media image any favors. This man, for example, was motivated to go by anti-semitism.

Neo-Nazi Patrick Little is in DC (weird, since he's supposedly denouncing Unite the Right). He unexpectedly showed up minutes ago near the Occupy Lafayette protest, parading…….this sign around:

A small stage was set up and a few unscheduled speakers addresses the group. The counterprotestors, who numbered in the thousands, chanted “Nazis go home!” and “Shame! Shame! Shame!” over the speakers.

Among the thousands of anti-racism counterprotestors who turned up was ResisDance, an LGBTQ organization that put together a dance party.

They had promised “lots of raging trans and queer dancers, rainbow biodegradable confetti, bumpin’ beats, and fabulousness,” and it looks like they delivered.

Covering #ResisDance protest making its way through DC on the way to the other demonstrations. pic.twitter.com/WS4f8eyX4f

The protest itself was a lot smaller than expected. When around 20 to 25 people turned out, Kessler, who organized the white nationalist protest, set out on the march to Lafayette Park several hours early to avoid the counterprotestors and the media.

There, they complained about the media and their own lack of organization, and then left. All in all, it wasn’t much of a protest.

One of the attendees was Dan, 19, from Long Island. He didn’t know that the others had marched hours before the scheduled time. When Vox‘s Zach Beauchamp asked him where the other protestors were, he said, “I don’t know.”

But don’t feel too bad for Dan, who went to the rally to advocate a “peaceful” ethnic cleansing in the U.S.

The counterprotest was a lot more lively.

Walt McGuire brought his daughter, Summit, to the counterprotest in Freedom Plaza. “It’s dumb,” 9yo Summit said of the white nationalists and their message. “I want people to know it doesn’t matter how young you are. You can make a difference and you should speak out.” pic.twitter.com/ccoQaD90o6