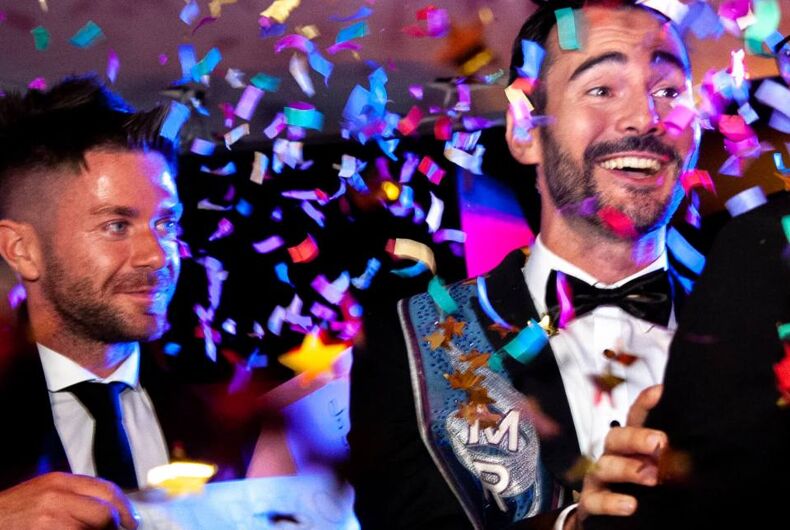 A 30-year-old financial planner from Germany named Enrique Doleschy bested six other finalists to win the title of Mr. Gay Europe in the 12th year of competition. The 2018 competition marked the first time a transgender contestant entered the race. Denmark’s Niels Jansen was crowned as the first runner-up.

It was the second time a man from Germany won the prize. The first time was in 2007 when Jackson Netto took home the title in Budapest, Hungary.

A Gay Pride Parade was held in conjunction with Mr. Gay Europe. Despite the celebratory mood, hundreds of anti-gay protesters lined the streets in the Polish city of Poznan to share their opposition of the event.

Protester and abortion rights activist Maciej Wiewiorka said, “It’s not right to give privileges [to gay people] or elevate them to the level of families. Giving them the right to adopt when these are freaks is absurd and shouldn’t happen.”

It wasn’t completely a surprise to hear. The annual Rainbow Europe survey by ILGA-Europe showed that Poland scored just 18 percent on LGBT rights. In a 2014 opinion poll from 2014 CBOS institute, 70 percent of Poles thought homosexual relations were unacceptable.

“Same-sex couples cannot marry or adopt children in Poland, which is one of Europe’s most devout countries and where the Church continues to play a key social role in shaping attitudes,” Agence France-Presse reported.

Still, they persisted. They marched forward in the parade.

“I hope this will help us in our fight for the same rights as those enjoyed in the rest of Europe,” parade organizer Pawel Zabilski said.

Doleschev said, “As long as there’s one person feeling like this, we need competitions like this to bring out the best in people and to force them, to drive them, to be better for each other.”

Mr. Gay Europe President Tore Aasheim said, “Mr Gay Europe is not a beauty contest. We are looking for genuine and real-life role-models for our LGBT communities across Europe and we are honored by the fact that a trans person wanted and felt comfortable enough to take part. Niels proved himself to be a positive and significant addition to the group of delegates.”

The competition consists of a variety of standards that must be met to win the coveted title. Among them are interview, written test, photo, congeniality, social media, individual project, sport, and online voting.