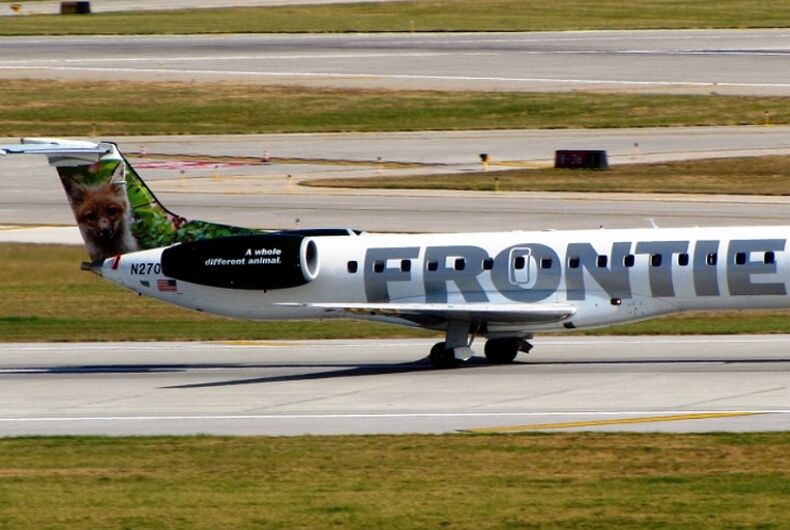 Frontier Airlines has suspended a pilot who is believed to have made violent comments on Facebook about a 12-year-old transgender girl.

Two weeks ago, a girl in the small town of Achille, Oklahoma, became the subject of a conversation on Facebook because she used the girls’ bathroom at her new middle school.

Some of the parents of other students and adults from neighboring areas made threatening comments about her, like “If he wants to be a female make him a female. A good sharp knife will do the job really quick.”

Frontier Airlines suspended a pilot in connection with these comments. While Frontier has declined to name the pilot while it investigates the situation, a spokesperson told the AP that the pilot was suspended last Monday.

The spokesperson said, “Frontier Airlines prides itself on setting an example as a respectful workplace and we do not condone discrimination.”

“We have long-established standards of conduct, to which all employees must agree to adhere, that among other things require people to act in a professional manner and to treat each other with genuine respect and kindness,” the spokesperson added.

Achille schools were closed for two days last week after the Facebook conversation came to light. The comments were transphobic and either expressed shock that there is a transgender student at the school or a desire for her to leave.

A few of them turned to violence. One commenter suggested encouraging other kids to beat her up.

“Just tell the kids to kick ass in the bathroom and it won’t want to come back!” the commenter wrote, referring to the trans girl as “it.”

After the schools were re-opened on Wednesday, a protest was held in support of the girl, who has only been identified as “Maddie” in the media.

Maddie’s mother has sought a protective order against one of the parents.

Madonna made an Aretha tribute all about herself. Twitter wasn’t having it.

These new LGBTQ pedestrian crossing symbols will make you proud