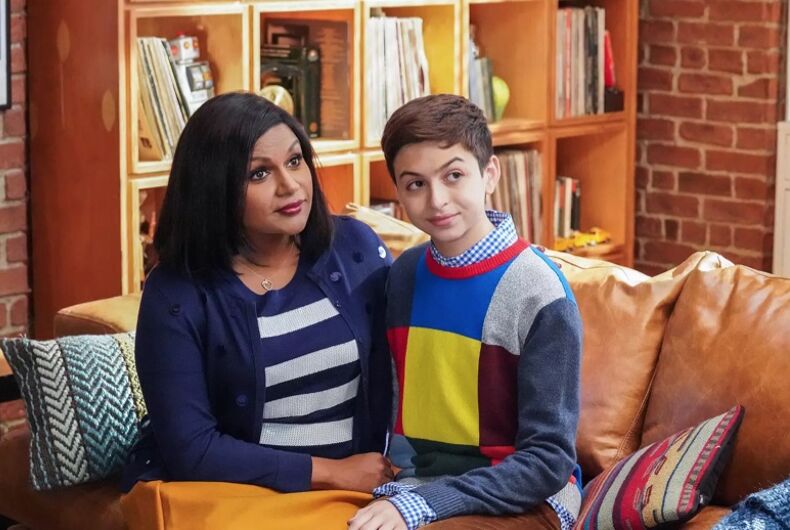 Mindy Kaling and Josie Totah on "Champions." Totah asked that photos of her for stories about her coming out use production photos rather than focusing on her looks currently.Photo: NBC promotional photo

Josie Totah, who previously acted in multiple television shows under the name J.J. Totah, is coming out as a transgender woman. Totah, who typically played gay teen or pre-teen boys roles, says she felt “like I let myself be shoved into a box” and now she’s coming out.

“In the past, I’ve halfway corrected people by telling them I identify as LGBTQ. I wasn’t ready to be more specific,” Torah wrote in an article for Time. “I was afraid I wouldn’t be accepted, that I would be embarrassed, that the fans who knew me from the time when I acted in a Disney show would be confused.”

“But I realized over the past few years that hiding my true self is not healthy. I know now, more than ever, that I’m finally ready to take this step toward becoming myself. I’m ready to be free.

“My pronouns are she, her and hers. I identify as female, specifically as a transgender female. And my name is Josie Totah.”

Totah began her career as a child actor on the Disney Channel show Jessie. She appeared in four episodes of Glee as the youngest member of the New Directions and had a starring role in Mindy Kaling’s short-lived comedy Champions.

“This week, I’m going off to college,” Totah writes. “I’m also going to continue my acting career, and I am so excited to do both things as myself. I plan to play roles I haven’t had the opportunity to play. And I can only imagine how much more fun it’s going to be to play someone who shares my identity, rather than having to contort myself to play a boy.”

“I’m going to gun for those roles, be it a transgender female or a cisgender female. Because it’s a clean slate — and a new world.”