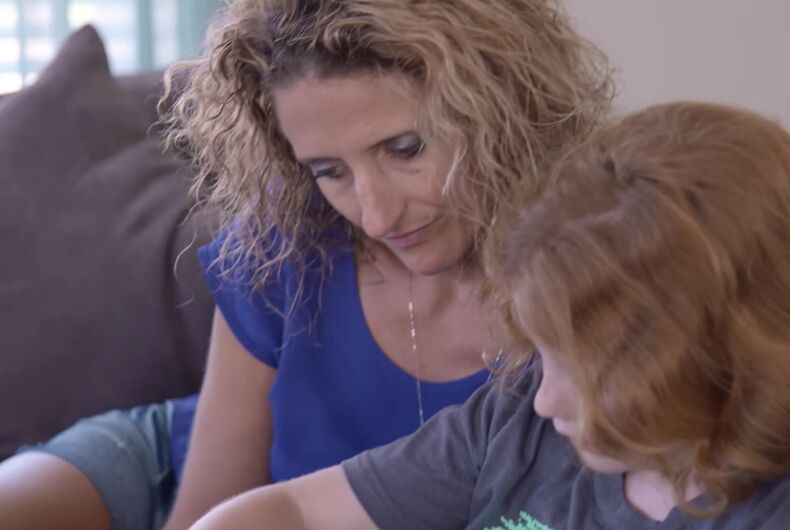 A mother of a transgender boy is speaking out after her son’s story was used to foment transphobia.

Two years ago, Vanessa Nichols’s son appeared in an episode of My Trans Life, a show that airs on Barcroft TV’s YouTube channel. In the video, Vanessa and her son talk about growing up transgender.

“I think I’m gonna take some medicine so that I can kinda like transform into a boy, get surgery,” the then 7-year-old said in the video. He’s now living as a boy.

The video got noticed by California political gadfly Austin Bennett. Earlier this year, Bennett ran a write-in campaign in the primary for a state senate seat, getting just 0.3% of the vote.

The Republican’s campaign website shows the usual far-right campaign issues – he calls for a ban on abortion and vaguely mentions “the federal government’s unconstitutional overreach” – but he also shows a special concern for more bizarre positions, like “unconstitutional” vaccines and the black market for “baby body parts.”

He posted the video of Nichols and her son, decrying a parent who would “allow an underage and immature child to consider a sex change.”

“Only the debase, defiled and sick man or woman would,” he wrote. “We have those in our government. Just look at who voted for any kind of law allowing children to make life changing decisions and you will know the devils.”

In the comments, he calls out pro-LGBTQ commenters for defending “a child’s so-called right to mutilate themselves.”

And while he defends “the rightful authority of parents” on his website when it comes to preventing kids from getting vaccines, on Facebook he was a lot less willing to defend parents’ rights, saying that Nichols has “no concept or parental sense how to raise and protect a child.”

The video, of course, is not about a 7-year-old preparing for any form of surgery. It’s about a child’s very real feelings of being a boy and how his mother is raising him.

The post has been viewed over 800,000 times and has received over 600 comments. Many of them are hateful, calling Nichols’s son “disgusting.”

Some of the commenters argue that there is a link between vaccines and LGBTQ identity, a claim with no scientific evidence behind it, but anti-vaccine comments appear on a number of Bennett’s posts.

A few of them are supportive, too. But that’s not enough to put Nichols’s mind at ease after Bennett used her “child as hate speech.”

“These are the types of online adult bullying that need to be exposed,” Nichols wrote in an email to LGBTQ Nation.

She’s also worried about possible violence against her family. “I feel as though this puts my child and I at risk, especially after what happened to Maddie,” Nichols wrote, referring to a group of adults that planned a violent attack against a transgender 12-year-old in Oklahoma several weeks ago.

What’s really behind the nonstop GOP attacks on Nancy Pelosi?