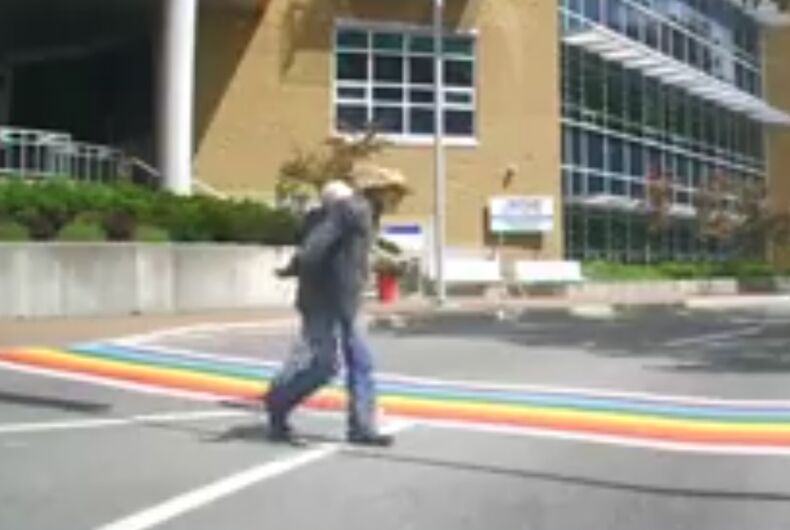 A ten-second dashcam video of a man spitting on a rainbow crosswalk has been viewed over 100,000 times.

Corner Brook is a small town of 20,000 in Newfoundland and Labrador, Canada. In 2016, the small town got two rainbow crosswalks as part of its Pride celebration.

Resident Lane Speckor caught a white man in a white hat on video spitting on the crosswalk, right in front of a woman he’s walking with.

“Took the time to let this couple cross the road and the man took the time to spit on the rainbow crosswalk,” Specker wrote. “Take note he also didn’t walk on it. There’s still a long way to go…”

Took the time to let this couple cross the road and the man took the time to spit on the rainbow crosswalk. Take note he also didn’t walk on it. There’s still a long way to go…

While the man might have just spit for no reason, that he wasn’t walking on the crosswalk and he spit in the direction of his companion has led many to believe that he knew exactly what he was doing.

“It looks pretty deliberate,” said Stephen Dunn, a gay director who made the film Closet Monster. He also shot the first “Canadian Heritage Minute” with an LGBTQ story.

“I’m personally really upset about it… and it’s not just because of this,” he said. “I grew up in St. John’s [in Newfoundland and Labrador], I grew up in a time when there was a lot of violence toward queer people, and we’ve come… so far.”

A transgender woman was found dead in Orlando. Then the media insulted her.

Gay couple say they were turned away by florist in Indiana