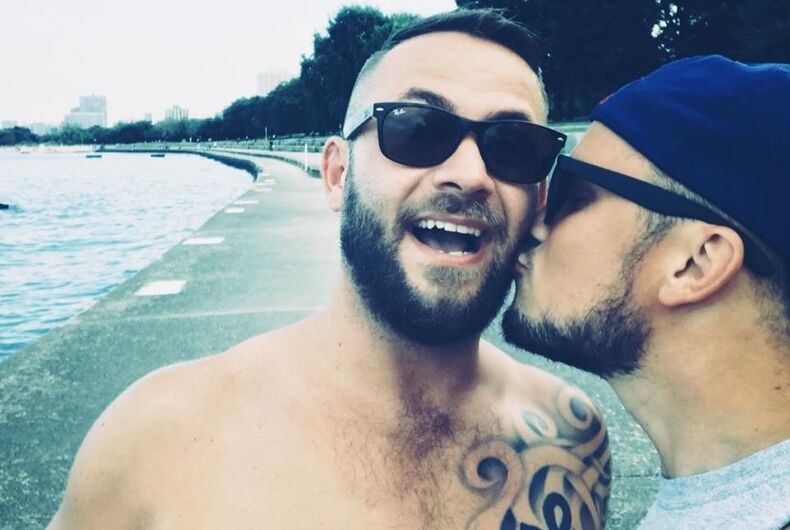 A florist in Avon, Indiana, refused to sell wedding flowers to a gay couple according to one of the men. David Elliott says he and his partner, Daniel Collins, were refused service when the shop owner realized the wedding didn’t include a bride.

Elliott posted on Facebook, “This morning I went in to look at flowers for my upcoming wedding. I was told to speak with the owner. When she came forward she asked me the date of my wedding. I told her and she said that was fine. I told her the flowers I would like.”

“She then asked what the bride would like. I replied there isn’t one. She then told me she would have to pass.”

Avon Flowers owner Rita Harris disputes Elliott’s version of events. She denied telling him it was because he and his fiancée are a gay couple. “I never said that to him,” she told LGBTQ Nation in an exclusive interview.

“What I said to him was that it conflicted with a vacation I have planned and I wasn’t taking any more orders at this time. I’m not planning to take any more weddings requests because I’m planning to retire,” she said.

The shop’s website advertises “a wide selection of bridal bouquets, wedding ceremony flowers, floral cake decorations, and centerpieces” currently available. There is no mention of the service not being offered any longer.

Elliott insists that Harris’ story is meant to cover up for her decision not to serve the couple.

“She only declined after I told her there was no bride,” Elliott told LGBTQ Nation exclusively. “I told her I needed flowers for my wedding and the date. She said ‘okay.’ I then said I needed two boutonnières and she said, ‘What for the bride?’ I said there isn’t one and she said, ‘Oh, I’m going on vacation.’ She was only going on vacation after she knew there was no bride.”

“I fully understand that everyone has their right to believe what they want. If you are open to the public….. serve the public. I’m not asking you to take any part in my life. Just do the job you are there to do.”

“It’s not worth it. I just wanted friends and family to not be hurt by it,” he said.

Supporters have already taken to the business’s Yelp page though, leaving reviews like the one from user Cassie J.

“My beautiful friend and his future husband came to this wedding florist to get flowers for their wedding. Now to me, a dollar is a dollar. It spends the same way no matter how you acquired it. But apparently to Avon Florist, dollars are very different. If you are a business open to the public, you should serve the public,” she wrote in her one star review.

“Also, I hope you are asking if any of those weddings will feature shrimp at the reception, because you shouldn’t just pick and choose pieces of the Bible to base your business on.”