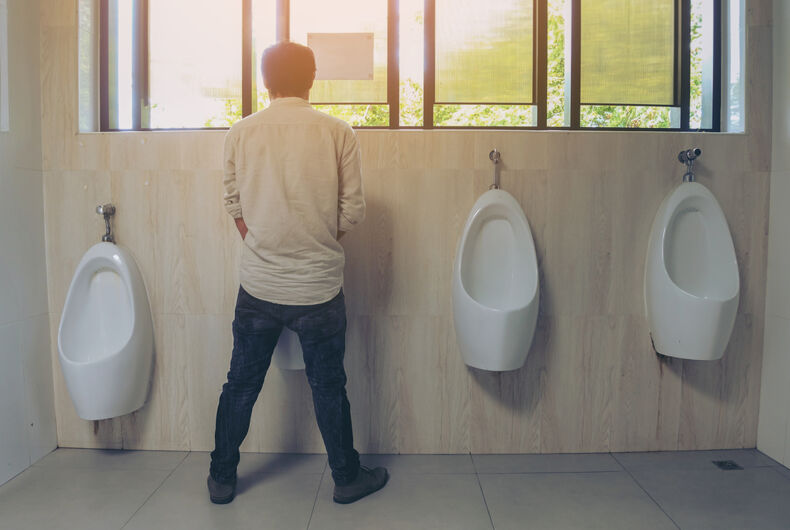 William Campbell is suing New York’s Metropolitan Transit Authority after he was humiliated and arrested while trying to use the bathroom in Grand Central Terminal. After being exonerated by a jury, Campbell is telling his story of police brutality and homophobia.

In an all too common experience for gay men in America, Campbell says an MTA police officer tried to induce him to have sex and despite being rejected, the cop arrested him without cause.

Court documents say Campbell was using the restroom when a “man using the urinal next to petitioner leaned over and looked at petitioner’s penis.” When Campbell “pushed the man away,” he says say the undercover cop jumped him, shouting, “What are you doing, you fucking faggot?” and calling him a “dirty homo.”

After cuffing Campbell so tightly his wrists bled, the unidentified officer marched him out of the bathroom, yelling “another pee-pee case!”

Campbell, who was charged with endangering the welfare of a child, criminal possession of a weapon in the fourth degree, exposure of a person, and public lewdness, was exonerated on all charges by a jury after numerous court appearances.

When a man responds – either by indicating arousal or responding to the officer – he is arrested. Many victims report that the officer will wait until after sexual activity has occurred before making the arrest.

It’s common for the men’s names to be published in local newspapers when police announce the arrests as particularly salacious. Numerous men – both gay and straight – who have been entrapped in the dangerous practice have died of suicide following their public humiliation.

Straight couples busted having sex in public are generally left alone and do not normally have their names published if they’re arrested.