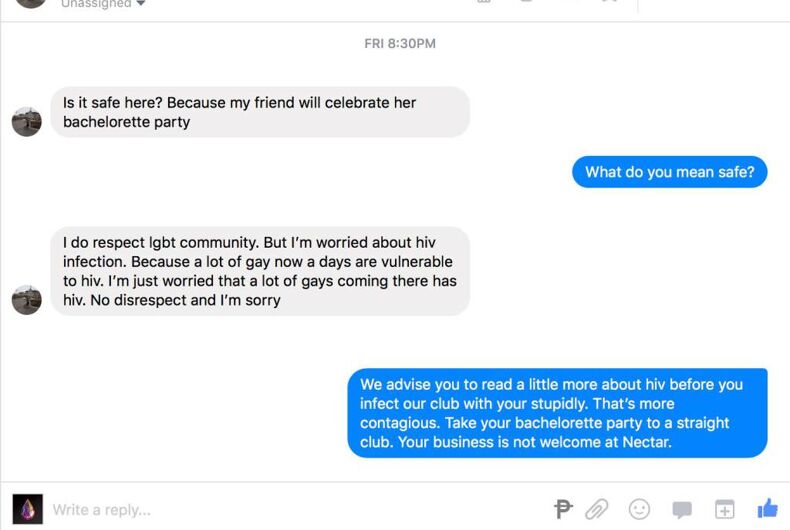 A gay nightclub published an online conversation they had with the organizer of a bachelorette party who said she was worried about getting HIV in the queer venue.

Nectar Nightclub is a popular LGBTQ club in Manila, Philippines, and, like other queer venues, it is apparently a choice location for bachelorette parties.

A person who was organizing a bachelorette party messaged the club on Facebook, asking if it’s “safe” at Nectar.

A club representative asked her what she meant.

She replied, “I’m worried about hiv infection. Because a lot of gay now a days are vulnerable to hiv. I’m just worried that a lot of gays coming there has hiv.”

“No disrespect and I’m sorry,” she added, as if that made the original message OK.

The club representative told her to educate herself about HIV before she “infect[s] our club with your stupidity,” which they said was “more contagious.”

“Take your bachelorette party to a straight club,” they admonished her.

Nectar posted a message to Facebook a week ago addressed to “straight bigots” with a screenshot of the conversation. The statement said that those at Nectar were “horrified” by the organizer’s “ignorance about HIV,” especially considering that they were going to celebrate a straight marriage at the club when marriage equality is not a reality yet in the Philippines.

They also said that the only violent incident they had in the past was with a bachelorette party.

“We have only had one serious fight inside of the club. A Nectar gogo boy was attacked by the boyfriend of a straight female bachelorette party attendee who was voluntarily getting a lap-dance. Our employee was punched in the head a total of fifteen times, rushed to the hospital and suffered a severe (grade 3) concussion.”

The message said that straight people are welcome at Nectar, but that they should “behave” themselves.

These lesbians are being threatened by their neighbor. Police won’t do anything to stop it.