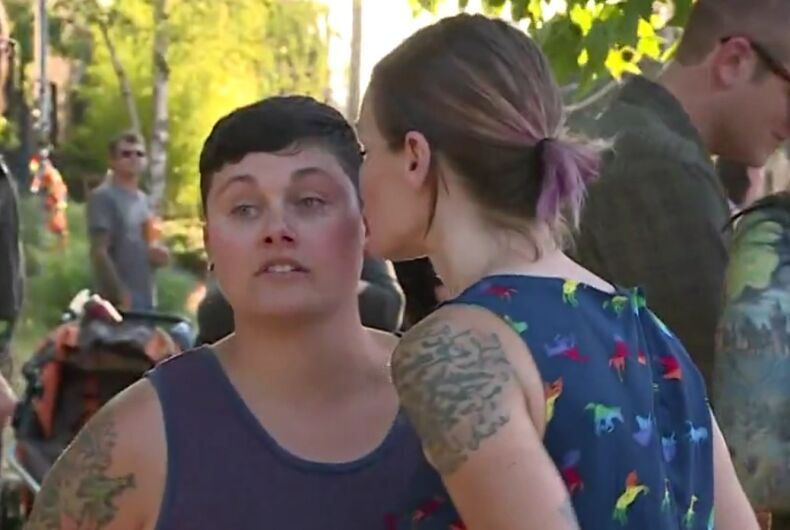 A lesbian couple in Portland, Oregon, that was targeted for hate speech is speaking out.

Trudy and Wendy Dragoon say they were going around their neighborhood on Sunday night, looking for the owner of a lost dog they found.

As they were crossing the street, they say they saw a truck drive toward them, and then do a U-turn and park near where they had run to the sidewalk.

Three men exited the car, and one “got out of the car and said something about ‘Beating the shit out of fucking dykes,'” Wendy said.

She pulled out her phone and started recording the encounter. A thin, white man can be seen raising his fists at Trudy and telling her to “act like a fucking man.”

He called her a “gay-pride ass bitch” and other slurs, including “cunt,” “bitch,” and “fucking lesbian.” He laughed as he described lesbian sex acts.

So this just happened. After he sped up like he was going to hit is as we crossed the street. And then a “good guy cop” rolled up and CLEARLY did not want to help us. Before he even got out of the car he was telling us to ignore him and just walk away. Then told us he couldn’t do anything. These little fuckers live around the corner. It will take them no time to figure out which house is ours so I guess we wait until we are physically assaulted before we can get help.

The confrontation continued for about three minutes, before a passing police officer approached and Wendy stopped recording. But the police officer said he couldn’t do anything until the man physically attacked Trudy.

“He actually said, ‘Being mean to you isn’t against the law,'” Trudy said.

Threatening physical violence, though, is a second-degree misdemeanor in Oregon under the state’s hate crime law.

At around midnight, fireworks were set off from the same property where the truck stopped, and the Dragoons were woken up. Another neighbor had already called the police to report the fireworks.

They went out to talk to the three police officers who responded to the call, but they were told again that the harassment wasn’t a hate crime since the men could not have known that the Dragoons were lesbians.

“I don’t feel safe in my home anymore. It wouldn’t take them long to find out where we live,” Trudy said.

On Monday, neighbors and other supporters came by to show their support for the Dragoons, holding rainbow flags, waving signs that say “love,” and writing messages on the street in chalk like “No hate welcome.”

A police spokesperson said that they are not at liberty to discuss an “open investigation.”