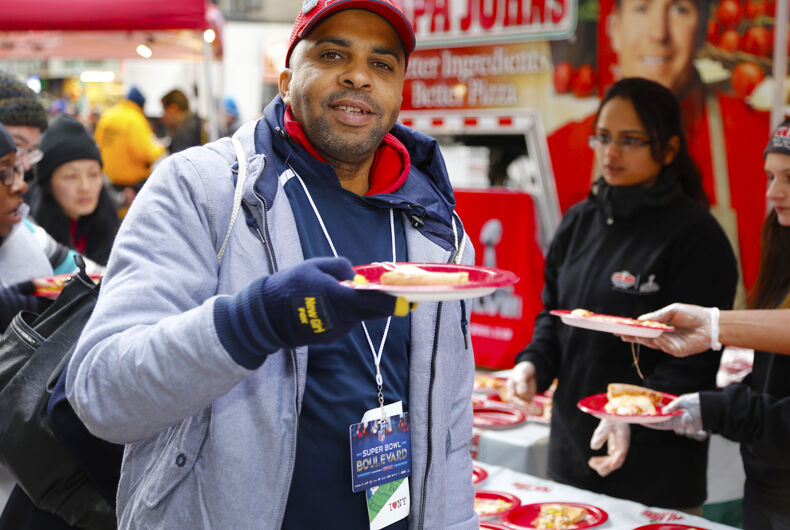 Papa John is the latest to use the n-word and then apologize. Kinda.

Because John Schnatter, founder of the giant pizza chain, blurted out the word during a crisis communication training session over the phone – and not in the face of an African-American – he argued his use of the word doesn’t constitute as a “slur.”

“It wasn’t a slur. It was a social strategy and media planning and training and I repeated something that somebody else said and said, ‘we’re not going to say that…”

Papa John will no longer be the public face of the pizza franchise.

There is some talk now that in this political climate the use of the n-word needs to be reexamined. Perhaps we should.

Some Blacks defend the n-word. In 2002, Harvard Law professor Randall Kennedy, who wrote Nigger: The Strange Career of a Troublesome Word, said that while the word has been used to “terrorize and humiliate” African-American, “It’s also been used as a term of endearment and a gesture of solidarity.”

In 2011, it was disclosed that at the entrance of former governor Rick Perry’s hunting camp is a rock painted in block letters with the word “Niggerhead.” In discussing the offensive racial moniker on Perry’s property, talk show host Barbara Walters of “The View” used the n-word, sparking a debate with her then-co-host Sherri Shepherd.

“I’m saying when you say the word, I don’t like it,” said Shepherd, who said she has used it among African-American family and friends. “When white people say it, it brings up feelings in me.”

Many black and white comedians never get the laughs they were going for using the word.

Obama’s send-off at the 2016 White House correspondents’ dinner ended with the n-word. Larry Wilmore, comedian, and then-host of Comedy Central’s “The Nightly Show,” in his closing remarks thanked Obama for his tenure as president said “…to live in your time, Mr. President, when a black man can lead the entire free world. Words alone do me no justice. So, Mr. President, if I’m going to keep it 100: Yo, Barry, you did it, my n—-. You did it.”

And, at that moment you heard audible gasps and saw visible grimaces of shock, pain, and embarrassment.

However, when the word slips from the mouths of race-conscious allies such as Bill Maher last year – the comedian and political commentator on HBO talk show “Real Time with Bill Maher” – a lot of shock and hurt was felt.

Another failed teaching moment was in January 2011. The kerfuffle focused on Samuel Langhorne Clemens, known as Mark Twain, in the NewSouth Books edition of his 1885 classic, Adventures of Huckleberry Finn.

In the original edition, the epithet is used 219 times. In an effort to rekindle interest in the Twain classic while tamping down the flame and fury the use of the word engenders, Alan Gribben, editor of the edition and an English professor in Alabama, replaced the word with “slave.”

And, in 1998, a national controversy ensued over the April headline in the Boston Magazine profile of Henry Louis “Skip” Gates at Harvard as the recent “Head Negro In Charge” of the black intellectual enterprise in this country. The appellation was intended to be a compliment, but the “n” doesn’t stand for “negro, ” and the controversy once again opened a dialogue about the n-word.

Is there a double standard here?

Shortly after Maher dropped the word, many on Twitter chimed in to defend him, saying he used a modified version, meaning it ended in an “a” rather than an “r” – and that this morphs the term into an endearment.

I contend that you cannot conjugate the word, because it is firmly embedded in the lexicon of racist language that was and still is used to disparage African-Americans. Many slaveholders pronounced the word with the “a” ending, and in the 1920s many African-Americans used the “a” version as a pejorative denoting class difference.

Last year, Martha Stewart dropped the N-bomb during a taping of “Martha and Snoop’s Potluck Dinner Party.” Stewart, still a neophyte to hip-hop culture, asked during a filming with Lil Yachty on the show in her maternal and clueless way and with no ill intent, “Yachty, does it upset you when Snoop says ‘nigga shit?’”

The confusion, however, illustrates what happens when an epithet like the n-word, once hurled at African-Americans in this country and banned from polite conversation, now has a broad-based cultural acceptance in our society.

There are many reasons to end the use of the n-word. The fact that African-Americans have appropriated it does not negate our long history of internalized self-hatred.

Our culture’s neo-revisionist use of the n-word makes it even harder to purge the sting of the word from the American psyche. And, our use of it speaks less about our rights to free speech and more about how we as a people – both white and black Americans – have become anesthetized to the damaging and destructive use of epithets.

What would work is a history lesson, because reclaiming racist words like the n-word does not eradicate its historical baggage and its existing fraught racial relations among us.

Instead, it keeps the hate and hurt alive. Papa John just proved it.