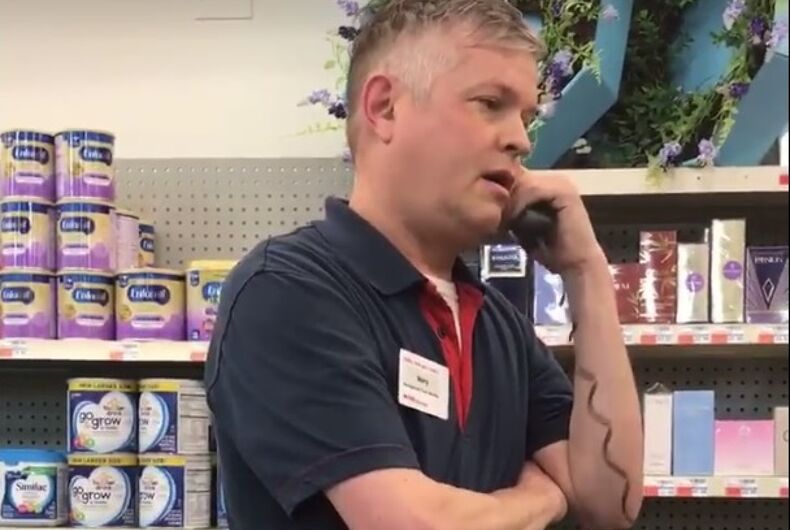 A Log Cabin Republican drug store manager called the police because a black customer tried to use a coupon this past Friday, and video of the phone call has gone viral.

On Friday night, Camilla Hudson tried to use a manufacturer’s coupon at a CVS drugstore just north of Andersonville in Chicago. The manager, who identified himself as Morry Matson in the video, said that he had never seen a coupon like the one Hudson had before and called the police.

Hudson posted the video to Facebook with the message, “So, THIS just happened: I had the police called on me for attempting to use a coupon @ the CVS Pharmacy located at 6150 N. Broadway in Chicago.”

In the video, Matson can be seen shaking as he talks to the police. He described Hudson as “African American,” and she responded, “I’m black. Black isn’t a bad word.”

Hudson said that she stayed at the store until three officers arrived, and she spoke to them before leaving. Chicago police have not commented on the incident.

A CVS spokesperson apologized in a prepared statement.

“We sincerely apologize to Ms. Hudson for her experience in one of our stores. Our Region Director in Chicago contacted Ms. Hudson as soon as we were made aware of this incident. CVS has begun an investigation and we will take any corrective action that is warranted to prevent it from happening again.”

“CVS Pharmacy does not tolerate any practices that discriminate against any customer and we are committed to maintaining a welcoming and diverse environment in our stores,” the statement said.

Matson, the manager, is running for 48th Ward alderman. The Chicago Sun-Times reports that his campaign website – which has since been taken down – promised “increased police presence” in the 48th Ward.

The manager is president of the Illinois chapter of the Log Cabin Republicans, an organization that represents “LGBT conservatives and straight allies,” and he supported Donald Trump in the 2016 election, according to Raw Story.

In 2016, Matson led an effort to get a bike path built by the city near his home. He submitted a petition for a ballot measure with 13 pages of signatures.

But an opponent of the bike path looked at the signatures and noticed that about five pages of them were false.

“I laughed out loud on the bus. I said are you kidding me? You just submitted this without even thinking anybody would look at it?” said the woman who noticed the fake signatures.

He admitted to falsifying some of the signatures and taking a year to collect them instead of doing it in the 90-day window set by the law.

Watershed moment for LGBTQ Hollywood at the Emmys