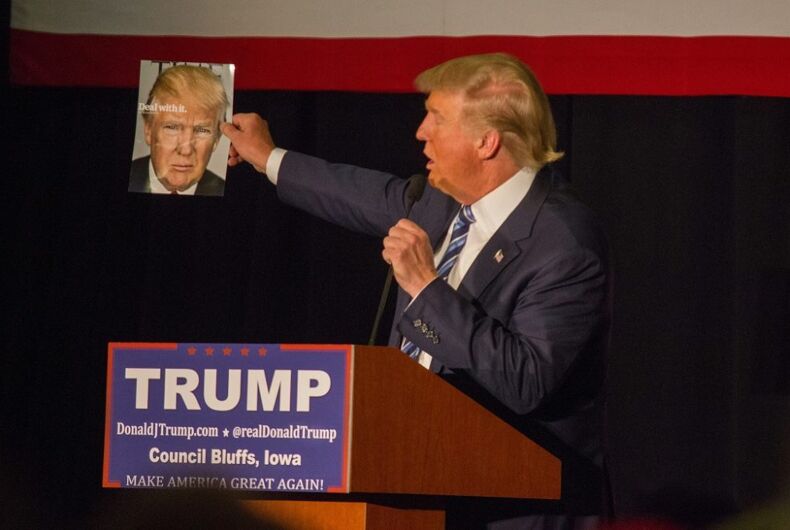 Presidential candidate Donald Trump holds up a magazine cover featuring himself while at a campaign stop at the Mid-America Center in Council Bluffs, Iowa.Photo: Matt A.J.

Enthusiastic “disrupter-in-chief” Donald Trump proudly and aggressively touts his opposition to so-called “political correctness,” which his most ardent supporters value above all else.

Let’s take look at his track record. These are the facts.

Trump verbally attacks our long-standing allies and imposes severe tariffs on their products.

He separates refugee children from their parents and places them in cages.

He demeans and degrades people of color while praising white nationalists.

He mocks people with disabilities and Gold Star Parents.

He attempts to deprive transgender people and same-sex couples of their dignity and their civil rights.

Trump refers to political rivals in nasty and insulting terms while heaping praise upon the world’s brutal tyrants.

He goes after women’s bodies and their reproductive freedoms.

He attacks our national institutions like the judiciary and national law enforcement agencies representing them in “deep state” conspiratorial jargon.

Trump violates policies meant to guard against financial conflicts of interests and pushes the bounds of nepotism.

He publicly humiliates his own staff and lies on an hourly basis.

He has no interest in (and seemingly no need for) study and preparation.

As someone whose decisions have the weight of the world virtually hanging in the balance, Trump reacts in ways attributed to Napoleon: “First we show up, then we figure out what to do next.”

The terms “political correctness,” “politically correct,” and “PC” are pejorative rhetorical ploys to intimidate, discredit and outright dismiss the statements, policies and actions of the progressive left, generally. More specifically, to inhibit critical thinking and the challenging of societal inequalities.

They did this not only to maintain their own privileged status quo, but more importantly, to roll back advancements progressives have made to ensure that our nation lives up to its promise and potential of becoming “a more perfect union.”

Conservatives originally deployed the terms in the 1990s as a reactionary backlash to the critical multicultural and social justice educational movements in our schools, and against attempts to promote sensitivity of the numerous cultural traditions that make up the fabric of our nation.

These educational movements stood as a contradiction to the so-called “neoliberal” era of standardization, corporatization, globalization, privatization, and deregulation of the business, banking and corporate sectors.

Jenkinson investigated instances of censorship and book banning across the U.S. He found a number of reasons individuals and organizations cited when challenging school- and public library-based books and other curricular materials.

Among the most often used justification: “Any assignments that encourage or teach critical thinking skills.”

A basic tenet in critical multiculturalism and social justice education is social reconstructionist or transformational education in which the educator’s role is to help prepare future citizens to reconstruct society to better serve the interests of all groups of people, and to transform society toward greater equity for all.

During the late 1940s, researchers, led by Theodor W. Adorno, studied the historical conditions that paved the way for the rise of fascist regimes in the 1930s, World War II and the Holocaust. The study theorized about individuals who supported the growth of fascism.

The study also suggested that people of a certain personality type, which they labeled the “authoritarian personality,” were most disposed to extremism, in this case, those most susceptible to believing anti-Jewish propaganda and anti-democratic political philosophies.

This is what Donald Trump represents.

Those who automatically throw “political correctness” into the debate, however, often do so because they lack the evidence, the specificity, or the nuance of any given topic under discussion.

I encourage us to embrace the acronym “PC,” and to practice the skill of treating all people with proper courtesy.

Remember that when people use the terms “political correctness,” “politically correct,” or “PC” in arguments, they have lost the debate because they do not have the facts.

Condoms used 100% of the time prevent 91% of HIV transmission