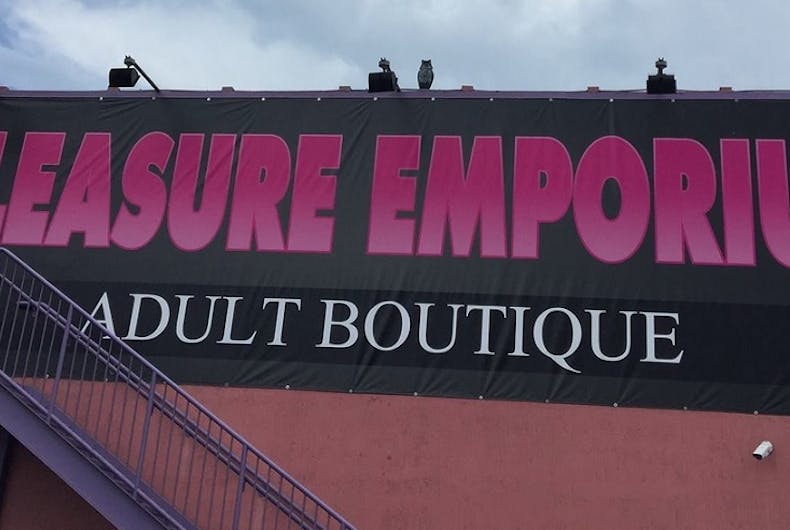 Publishing mugshots, names, and other identifying information of men arrested in gay sex stings might seem like something from the pre-Stonewall era, but several media outlets did just that last week.

Police in Hollywood, Florida, responded to a single anonymous complaint of lewd behavior going on at Pleasure Emporium, an adult bookstore.

It might be difficult to imagine who the victim is here, since this is a private building where adults were engaging in consensual sexual activity.

Indecent exposure in Florida has to occur in a public place or somewhere that can be viewed from a public place. Police are already arguing that the backroom of an adult bookstore is so public that people might accidentally walk in.

“It’s a place of business and you shouldn’t have to also be there and have to be there worried about people exposing themselves and performing sex acts,” said Hollywood police spokesperson Miranda Grossman.

It’s very unlikely that anyone who drove all the way to the Pleasure Emporium, entered the adult bookstore, and bought a $25 ticket for the backroom would be “worried” that other people would have sex around them.

So local media outlets could have asked why the police arrested these men and put them on a path to the state’s sex offender registry. Instead, they decided to humiliate and out men whose sexual orientations aren’t in the public interest at all.

CBS 12’s story on the sting is little more than a list of the men’s names, races, and birthdates. ABC 10 published their names and ages and made a slideshow of their mugshots. NBC 6 aired all their mugshots and identified several of them by name.

And the Miami Herald, according to the Miami New Times, ran their names, ages, and mugshots, and also cracked jokes about their arrests. Their article has since been “updated to remove portions deemed inappropriate under the Miami Herald’s editorial standards.”

“We agree it was unnecessary to have run the IDs and mugshots,” Miami Herald metro editor Jay Ducassi said. “We re-edited the story and took them out.”

While there’s no journalistic justification for publishing these men’s names and photos, the consequences of outing LGBTQ people are well known.

These men will have to explain to their families, friends, and anyone who googles their names why they were at the Pleasure Emporium. Their employers and future employers will assume they’re gay, and Florida – of course – doesn’t ban discrimination on the basis of sexual orientation.

And outing can be deadly. In 2007, a Tennessee man whose name and mugshot were plastered all over local media after he was arrested in a gay sex sting committed suicide less than 24 hours later.

“The act of outing someone is detrimental because it is a violation of their privacy,” wrote Arielle Schwartz for the National LGBTQ Task Force. “Often people who are outed feel blindsided and forced to reveal a deeply personal part of their identity without their consent and under someone else’s terms.”

“Coming out is a process and can be a difficult time for someone because of discrimination, homophobia, or potential marginalization from their families and community at large. People must choose for themselves how and when to come out.”

These men might not have committed any crime – police often lie during these sorts of sting operations because they’re just hoping that the gay men will plead guilty to make the whole thing go away, and it remains to be seen if prosecutors can convince a judge that the backroom of an adult bookstore is a public place.

But even if they did, is their crime so horrible that it justifies ruining their lives?

The American Red Cross faces a critical blood shortage, but gay donors are being turned away

This Republican candidate swears being ‘homosexual’ is more unhealthy than smoking