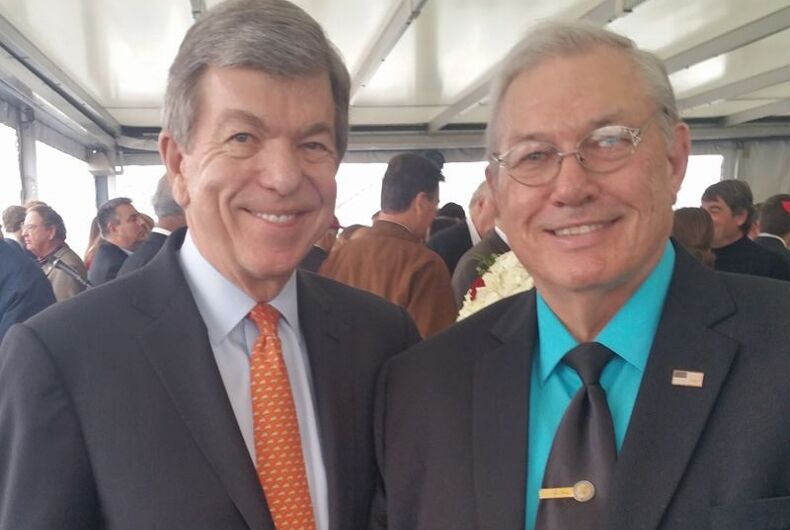 Billington has made it a habit to loudly and forcefully share his opinion on “homosexuality” and “transgenderism” whether anyone wants to hear it or not. He posts about it on social media, takes out ads in the local newspaper, and even wrote a book about it.

Now he’s running for the Missouri state legislature and there’s a good chance he’ll win the election. Almost 4/5 of the county voted for Donald Trump in the presidential election. The current representative is the Republican Speaker of the House.

Billington has made all sorts of outrageous claims about LGBTQ people – gay men in particular. He regurgitates far right “scientific” nonsense despite the easily available proof that it’s fake.

“Study after study reveals that homosexuality, whether male or female, can take anywhere from 10, 20 or 30 years off of someone’s lifespan,” he wrote on Facebook in a post advocating for passage of a bill that would have forbidden Missouri teachers from mentioning LGBTQ people in class.

“With all the attention to smoking, which the National Cancer Institute says takes from 7 to 10 years off someone’s life, why not the same outcry on homosexuality?”

Probably because those statistics are twisted out of a study from the early 90s done when AIDS was ravaging the gay community.

“I’ve known Hardy for 30 years, and I knew he had published those ads,” Smith told the St. Louis Post-Dispatch. “I don’t think it’s right to discriminate against people because of who they are.”

But with public opinion swinging in favor of LGBTQ rights, will it affect his chances at all? Even a majority of Republicans support same-sex marriage and non-discrimination protections now.

Probably not. As we saw with the last presidential election and the close race waged by accused sexual predator Roy Moore in Alabama, red state Republicans are much more worried about the candidate’s party affiliation than moral character.

It is 2018, and I really hoped that Poplar Bluff was better than this. But Hardy Billington is currently running a…