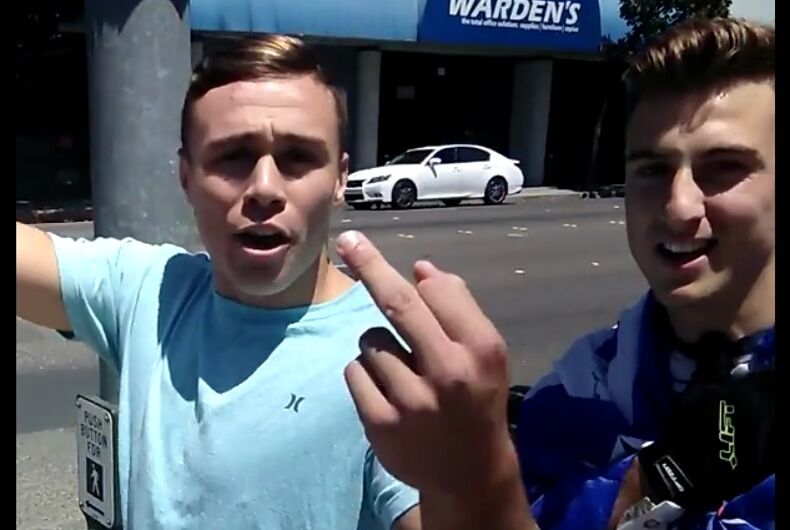 A California student lost his wrestling scholarship after he was caught on video using an anti-gay slur.

Bronson Harmon had a scholarship to California Polytechnic State University in San Luis Obispo, but the school rescinded the scholarship after he got involved in several altercations.

On June 30, the recent high school graduate attended a counter protest of the Families Belong Together March in Modesto, California.

The Families Belong Together March was a protest of the Trump Administration’s policy of arresting asylum seekers and separating them from their children.

In a video that was viewed over 30,000 times on Facebook, Harmon can be seen marching behind his father Todd. Bronson is carrying a Trump sign, and he flips off the person recording the counter protest and shouts, “Fuck you, faggot” at them.

MODESTO POLICE DEPARTMENT Modesto, California Oakdale, California Modestopd BackgroundI and a group of people where already walking back to our vehicles after the #KeepingTheFamilesTogether march; when I heard a group of men shouting and trying to scare us by saying #sendthemback and even yelled at someone nig**! I was so in chocked, so I automatically pulled out my phone to record, and see who was being so disrespectful! I was flipped off and called a #FAGGOT by #DeeAnnHarmon #BrandonHarnon from #Oakdale for either my dark skin or my #WorldPeaceSign ?? Not sure but I was impressed by how these 3 men were acting. The older gentleman had gloves on to I guess injured someone without leaving finger prints? Later on I heard that there was a police report about these men, for beating up a 60 year old VETERAN! This Earth needs more love and peace! We all have a different mind set; but we shall all learn how to respect each other. I strongly believe that we need more unity, love and respect for America! God bless my country and all of you!! 🇺🇸🇺🇸🇺🇸🇺🇸🇺🇸🇺🇸#Modesto CA held a peaceful march today to #KeepFamiliesTogether and ofcorse; the typical #DonaldTrump hateful supporters had to come out and spread hate👎 #MakeThemFamous #modestoca

In another video that has since been removed on Twitter, Harmon shouts, “Take pictures of this! Trump 2020!”

Harmon, his father, and a friend also started a fight after the protest. According to the police report, a man was picking up a screwdriver behind their car. The group confronted the man and pushed him against a tree. He said that he was bleeding but did not seek medical attention.

Harmon denies touching the man and said that he thought the man was trying to vandalize the car with the screwdriver.

The university’s athletic director Don Oberhelman declined to comment on Harmon’s scholarship. Instead, he said that students who receive an athletic scholarship sign a form that says that they acknowledge that the school can rescind the scholarship if they “cause embarrassment” to the athletics program.

“Saying what I said is definitely not the right thing,” Harmon told the San Luis Obispo Tribune yesterday. “I am supposed to be there to help the community be the best person I can be and represent the college the best way I can.”

While Harmon was protesting in favor of Trump’s “zero tolerance” policy towards asylum seekers, he does not feel like a zero tolerance policy should be applied to him.

“But I still feel like my freedom of speech was taken away, and I don’t think my scholarship should have been revoked over something like that.”

Harmon says that he will still attend Cal Poly, but he won’t be on the wrestling team. He said that he will focus his energy on becoming a mixed martial arts fighter.

Why is the New York Times joking that Trump & Putin are gay lovers?