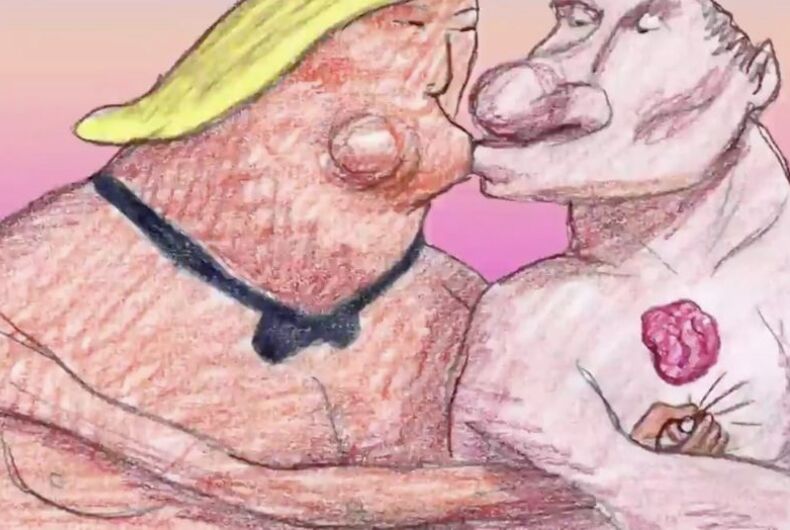 Trump and Putin: A Love StoryPhoto: The New York Times

The New York Times would like to remind you that even the supposedly liberal media aren’t all that woke.

In a cartoon posted in the media giant’s op-ed section, the beacon of journalism in the U.S. decided that the real reason why Donald Trump and Vladimir Putin are so close is because they are–wait for it!–gay.

Yes, fifty years after Stonewall, the disastrous relationship unfolding between the two countries has been reduced to a punchline based on the assumption that the best way to make a joke about world leaders is to brand them as homosexuals.

The cartoon, part of a series of three by Oscar-nominated animator Bill Plympton, actually surfaced late last month, just in time for Pride festivities. The cartoon attracted some attention–and plenty of criticism–then. But the controversy blew up on Monday when the Times decided, via tweet, that the timing was right to bring the cartoon back to everyone’s attention.

The cartoon uses actual audio of Trump praising Putin, pairing it with images that portray Trump as a smitten lover. He meets a shirtless Putin at the door to his home, and the next thing you know both are shirtless and riding a unicorn over rainbows.

At one point, the cartoon plays a clip of Trump saying that “Russia is like, I mean, they’re really hot stuff,” while showing Trump pinching Putin’s nipples and then the couple’s tongues wrapped in a passionate kiss.

Needless to say, in light of the press conference in which Trump dismantled the world order in favor of Putin’s authoritarianism, the supposed joke was even less funny the second time around.

Explaining Trump’s affinity for Putin–or worse still, belittling it–as a sexual relationship between the pair was doubly offensive: it minimized the damage being done by Trump, while at the same time made gayness a joke.

Quite an achievement for a supposed knee-slapper.

The cartoon, which still is on the Times‘ website, was widely shredded. Gay comedian and writer Guy Branum had the best take.

You’ve done it guys. You’ve saved democracy by saying Trump and Putin are gay for each other. The first 1000 times didn’t work, but your version was the final nail. You have humiliated them out of destroying democracy by saying they are like gay people. The union is safe.

Of course, it wouldn’t be American politics circa 2018 if the right-wing didn’t use the controversy for its own purposes.

Fox News went to Chris Barron, the co-founder of the failed GOProud and the force behind the feeble LGBT for Trump effort, for a quote bashing the Times. Perhaps most ironically, RT, the English-language Putin-sponsored media outlet, slammed the Times for “hypocrisy.”

These jokes rely on the belief that the best way to make fun of Trump and maybe even infuriate him is to call him gay. And that belief relies upon homophobia, plain and simple.

It’s a schoolyard taunt of calling someone a faggot. Ask anyone who’s ever endured that branding and the bullying that comes with it how funny it is.