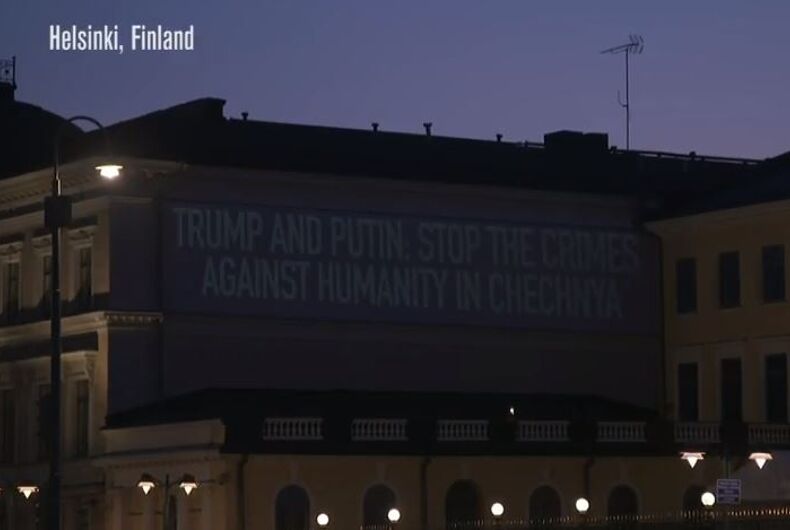 U.S. President Donald Trump and Russian Oligarch Vladimir Putin are meeting in Helsinki, Finland, and the Human Rights Campaign (HRC) has a bold message for them: we’re watching.

The organization projected a scrolling video message on the side of the Presidential Palace where the two were scheduled to meet. The message was clear: stop the killing of innocent LGBTQ people in Chechnya.

The scrolling message read: “Trump and Putin: Stop the Crimes Against Humanity in Chechnya. Investigate LGBTQ Persecution in Chechnya. Bring the Perpetrators to Justice. The Whole World is Watching. Silence is Deadly.”

The hashtag #EyesOnChechnya closed the message.

HRC Global Director Ty Cobb also spoke at a rally in Helsinki to crowds gathered in protest of the Trump-Pence and Putin regimes’ dangerous attacks on LGBTQ people.

“Trump has unconscionably turned a blind eye to some of the worst anti-LGBTQ atrocities in a generation, including monstrous attacks on gay and bisexual men in Chechnya,” said Cobb said.

Cobb added, “HRC is here in Helsinki to demand Donald Trump end his deafening silence, publicly condemn these Chechen crimes against humanity, and call on Putin to investigate and bring the perpetrators to justice.”

Ahead of the Trump-Putin Summit, @HRC's Global Director @TyWesleyCobb spoke at the #HelsinkiCalling rally in Finland to call out @realDonaldTrump’s deafening silence on the ongoing anti-LGBTQ crimes against humanity occurring in the Russian republic of Chechnya. #EyesOnChechnya pic.twitter.com/f5BCavJHKp

“We are grateful to all people and organizations who support our work in Chechnya. International attention is essential to putting pressure on Russian authorities to take action,” said Igor Kochetkov, chair of the Russian LGBT Network, Russia’s largest network of organizations fighting for LGBT human rights.

“Finland is known as a global leader in LGBTI rights, and the Trump and Putin administrations should learn from that example,” said Viima Lampinen, chairperson of Seta, Finland’s national organization for LGBTI rights.

“LGBT Chechens are being deprived of their voice, their freedom and even their lives by state-sanctioned oppression and violence,” Lampinen added. “Those of us who have a voice, particularly national governments that claim to support and defend human rights, have a moral and ethical obligation to ensure that the perpetrators are brought to justice.”

Great World Cup. Question for President Trump as he meets Putin: Do you know which team you play for?

On April 1, 2017, Novaya Gazeta, a Russian independent media outlet, first broke the news that Chechen authorities rounded up and detained in secret prisons more than 100 men who were suspected of being gay or bisexual. Chechen leaders have denied these accusations, going so far as to deny the very existence of LGBTQ people in Chechnya – a claim the Russian government astonishingly repeated.

Nonetheless, there have been numerous verified reports of torture and at least three and possibly as many as 20 men have been killed. Chechen officials have also reportedly encouraged families to murder relatives they suspect might be gay or bisexual.

While the initial detentions and attacks targeted men suspected of being gay or bisexual, the campaign has also brought about a surge in lesbian women sharing stories about humiliation, abuse, and threats they have faced from male relatives or from others.

Trump and this White House have refused to publicly condemn the attacks.

Nearly 300 billboards like this one have gone up around Helsinki ahead of the Trump-Putin summit. pic.twitter.com/tT47PMcwBI

In September, a Washington Post article quoted a State Department spokesperson, who said the United States will “continue to raise our concerns about this situation with Russian authorities.”

The spokesperson claimed the now-former Secretary of State Rex Tillerson had written a letter to Russian Foreign Minister Sergei Lavrov raising the issue. That letter was never released publicly nor was it accompanied by any public statement on Chechnya.

In October 2017, HRC filed a Freedom of Information Act (FOIA) request with the U.S. Department of State for all records regarding that letter – a request that has yet to be fulfilled.

While the White House has remained silent, both the U.S. House of Representatives and the U.S. Senate have passed bipartisan resolutions condemning the atrocities.

Since news of the attacks first broke, HRC has sounded the alarm through an #EyesOnChechnya campaign and repeatedly called on Trump and Pence to speak out and take action.

In March, HRC also released a letter from HRC President Chad Griffin to Trump calling on him to end his deafening silence and publicly condemn the attacks as crimes against humanity.

In June, a gay Chechen refugee joined HRC in Washington for a series of meetings with U.S. government officials, where he shared how he had been brutally tortured in Chechnya and managed to flee to safety in Canada with the help of the organization Rainbow Railroad.

HRC also shared the first-hand story of one of the Chechen survivors on World Refugee Day.

46% of bisexual women have been raped in their lifetime