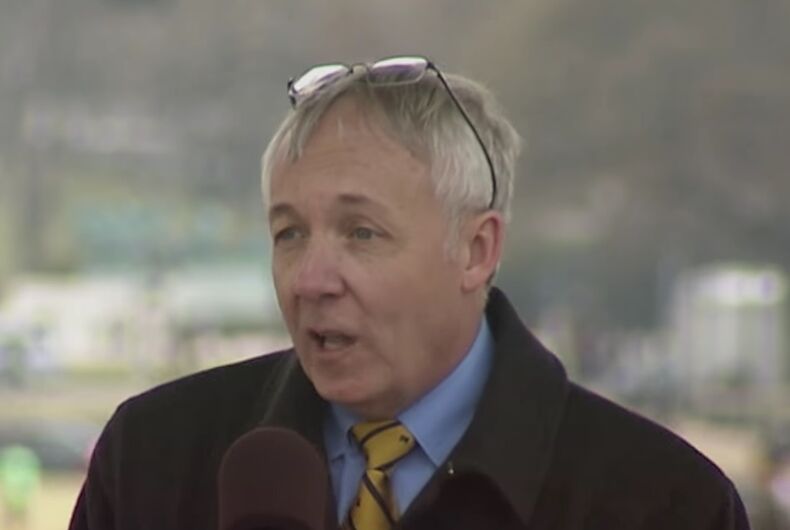 Doug Mainwaring speaking at an anti-gay rally held by the National Organization for Marriage.Photo: YouTube

In a column, he attacked Fox News for hiring Guy Benson. Benson is a mainstream, Trump-supporting conservative who likes to play the “both sides are wrong but really conservatives are right” card.

Mainwaring denounced Benson’s new job as a sign of the “gaying of Fox News.”

“There has been a decidedly pro-gay uptick in on-air talent, editorial content and signaling,” Mainwaring wrote.

He cited a few Fox News personalities who tweeted congratulations to Benson for getting a job at Fox News. “They have a soft spot for romantic sodomy,” Mainwaring wrote.

He also accused a Fox News pundit of valuing “sodomy over the tenets of his Catholic faith,” even though the pundit in question is not Catholic. Oops.

Gay conservatives are a diverse group. Some call themselves conservatives but vote for Democrats. Others believe that lowering taxes on the wealthy is a more important goal than LGBTQ equality. Some are just really racist and don’t care much about gay rights. Still others are either in the closet or call themselves ex-gay.

Mainwaring is none of those. He’s openly gay and opposes gay rights for the same reasons other Christian conservatives do: they think gay love is evil.

The founder of the National Capital Tea Party Patriots has said in the past that marriage equality will “undefine” children and “unravel” marriage. Earlier this year, he wrote a kooky column about how figure skating proves that God intended for people to be straight.

His columns on LifeSiteNews are mostly about LGBTQ issues, denouncing “homo-tyranny” and calling Pope Francis’s timid support of gay people the “lie of the century.”

His shtick is that he’s a gay dude who tells Christian extremists that it’s OK to hate gay people.

But how does he justify this self-hatred? In a 2013 article about his opposition to marriage equality, Mainwaring wrote that he just likes hanging out with straight dudes. It’s 100% platonic, of course.

During college and throughout my twenties, I had many close friends who were handsome, athletic, and intelligent, with terrific personalities. I longed to have an intimate relationship with any and all of them. However, I enjoyed something far greater, something which surpassed carnality in every way: philia (the love between true friends)—a love unappreciated by so many because eros is promoted in its stead.

I wouldn’t have traded the quality of my relationships with any of these guys for an opportunity to engage in sex. No regrets. In fact, I always felt like the luckiest man on the planet. Denial didn’t diminish or impoverish my life. It made my life experience richer.

He ended up marrying a woman, and he says that they were very happy together. So happy, it seems, that they divorced.

Mainwaring wrote: “The divorce allowed me to explore my homosexuality for the first time in my life.” That exploration led him to the conclusion that gay sex is icky and he moved back in with his ex-wife.

Now, he says, he’s celibate. He lives with his ex-wife and says that he knows there would be no “warmth and tenderness” if he lived with another man.

It’s not surprising that a gay person raised in a homophobic culture hates his own sexuality, and internalized homophobia causes LGBTQ people to lash out against each other because other LGBTQ people remind us of a part of ourselves that we hate.

Where Mainwaring sets himself apart, though, is the intensity of that misdirected self-hatred, and how he has turned it into a lifestyle. The Christian right will give him some of what he needs – some acceptance, some approval – as long as he’s useful to them.

He claims that he’s a model of “psychological health,” although he didn’t explain what a psychologically healthy gay man is doing accusing Fox News of supporting “romantic sodomy” because it doesn’t discriminate enough against LGBTQ people.