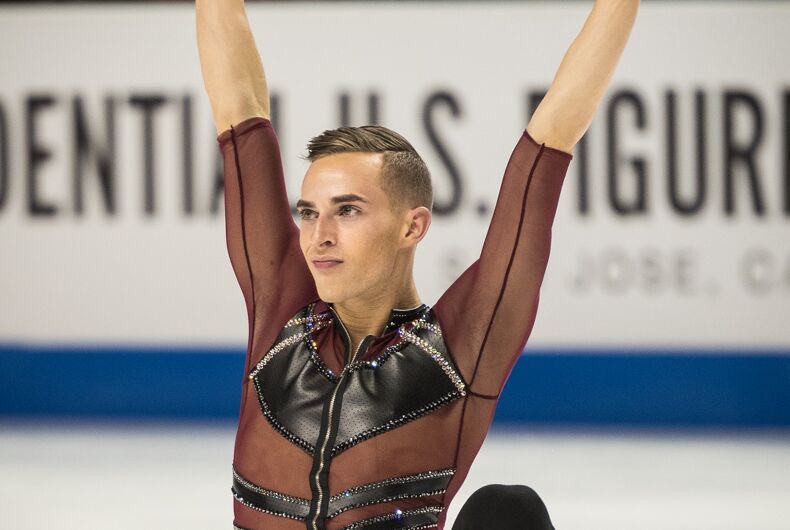 Adam Rippon, being amazing. LifeSiteNews has not explained what solo events tell us about the best relationships yet.Photo: Shutterstock

Doug Mainwaring at LifeSiteNews wrote an article about how figure skating is proof that straight people are better.

His argument? The pair event involves a man and a woman.

The three “out” gay male figure skaters in this year’s Winter Olympics are partnered with women, not men, precisely because their sport is wholly reliant on complementarity.

Without the complementarity of the male and female skaters, the event ceases to exist.

Yet much of the world has been blinded to the fact that this very natural truth applies even more to marriage than it does to skating.

And so despite being same-sex attracted, despite the demands of LGBT ideology, they choose not a same-sex partner, but a woman.

Clearly, the gay male athletes didn’t skate with women because that is a rule in the event. No. It’s a choice, and only the man’s choice, as God intended.

Mainwaring’s logic – that relationships should reflect the composition of Olympic team events – is flawless. I feel the same way about the two-woman bobsled event… or men’s curling, which involves a team of five.

LifeSiteNews is a little kooky, but they’re also one of the biggest Christian websites out there. A lot of Americans are bobbing their heads along with this.

While America cries out for stricter gun laws, politicians keep doing the opposite

Adam Rippon didn’t get a medal, but he’s still a winner