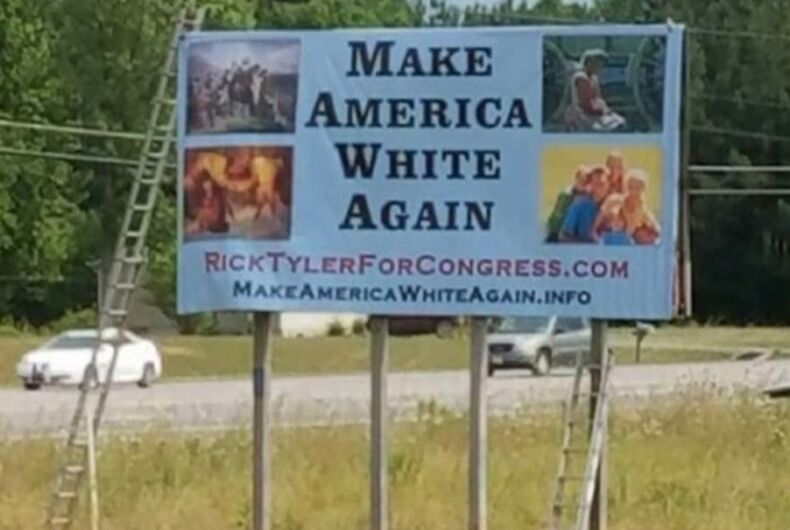 A pair of controversial billboards — one in northeastern Tennessee and one in the Texas panhandle — are coming down after local protests.

The Tennessee ad, from a conservative-fringe Congressional candidate, proclaims “Make America White Again.” Rick Tyler, a restaurant owner running for the 3rd District seat, put up the billboard on Highway 411, in Polk County.

ABC affiliate WTVC reports it was taken down Tuesday night, and Tyler’s campaign site — with an illustration of Confederate flags surrounding the White House — is no longer online. While it was up, it cited Trump and Ann Coulter as inspiration for the billboard.

In Texas, an unidentified individual paid for the billboard about 30 miles west of Amarillo with a decidedly divisive message. “Liberals: Please continue on I-40 until you have left our GREAT STATE OF TEXAS.”

A passing driver posted it to Facebook and wrote “I like it!” Response fell upon predictable fault lines as she reveled in her notoriety and the publicity.

But the resulting protest swamped the site of the billboard company, Burkett Outdoor Advertising. Its owner, Randy Burkett, told the Star-Telegram, in Fort Worth, the billboard would be taken down.

“I was shocked that it traveled that fast,” Burkett said. “I believe in free speech, but this country is divided enough as it is. I’ve spoken with the client, and he’s agreed that it should come down. We’ll be reimbursing him.”

Pride in Pictures 2008: The Pride flag is now our icon