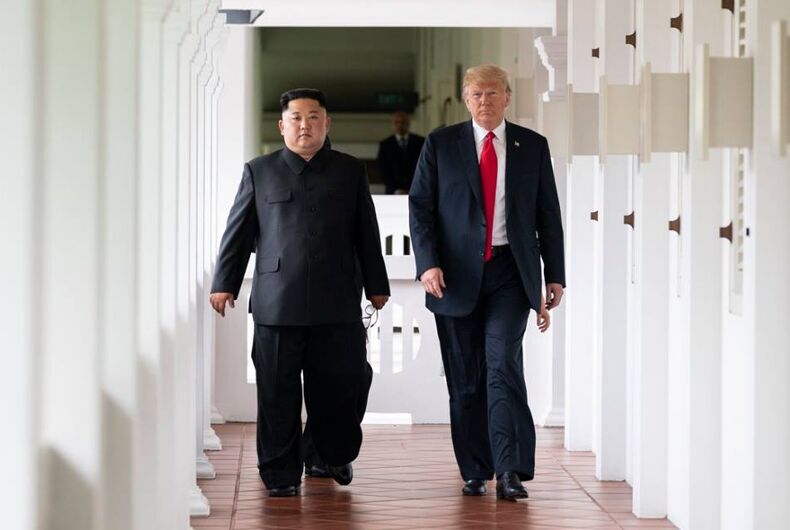 Only Donald Trump would call meeting the leader of one of the most repressive nations in the word “a great honor.” In meeting with North Korean leader Kim Jong Un, Trump once again displayed his affiinty for dictators and the hollowness of his self-legendary negotiating skills. (Kim got a lot, the U.S. got next to nothing.)

But Trump made one thing clear during the summit in Singapore. Human rights will never be an issue in the Trump administration. Trump never brought them up in his meeting.

Instead, Trump gave Kim a pass for his murderous ways on the grounds that everyone does it. “I believe it’s a rough situation over there,” the president said. “It’s rough in a lot of places, by the way, not just there.”

All of which means that Trump gave a green light to LGBTQ oppression overseas.

Other nations watch closely for signals from the U.S. government. Trump sent the clearest signal possible to the nations that encourage attacks on dissidents in general and LGBTQ people in particular: the U.S. doesn’t care.

This is a complete turnabout from the Obama administration. Obama made of point of bringing up LGBTQ rights to oppressive countries, famously talking about the issue during a visit to Kenya while standing next to the country’s president.

Obama’s position was codified in a 2011 memorandum that directed the government to “promote and protect the human rights of LGBT persons.” That meant that embassies would not only engage in symbolic acts, like supporting pride events, but would provide millions in aid to LGBTQ groups and citizens in need.

Now, of course, we have a government that won’t even acknowledge pride events within its own borders. If you are an anti-LGBTQ dictator, you don’t have to be a brilliant strategist to know that the Trump administration will never give you grief for your crackdowns.

The withdrawl of support for LGBTQ rights is one of the ripple of consequences from the Trump-Kim summit. Being gay in North Korea is its own particular nightmare, but the human rights issues there are so broad that it’s just one of many horrors in the regime.

There are 130,000 people in concentration camps in North Korea. If President Trump can’t take Kim to task for that, then no dictator need worry about American censure.

But Trump has always shown an affinity for dictators over democracy. His love affair with Russian president Vladimir Putin, who has made life hell for LGBTQ people in his country, is the prime example, but hardly the only one.

As a reminder, it didn’t have to be like this. As Secretary of State, Hillary Clinton told the U.N. that “gay rights are human rights, and human rights are gay rights.” Clinton even got into shouting matches with Russian officials over their treatment of LGBTQ people.

But that was before we learned that the greatest national security threat facing the U.S. was Canada’s dairy tariffs.

Celebrate Pride with this special video from Will & Grace