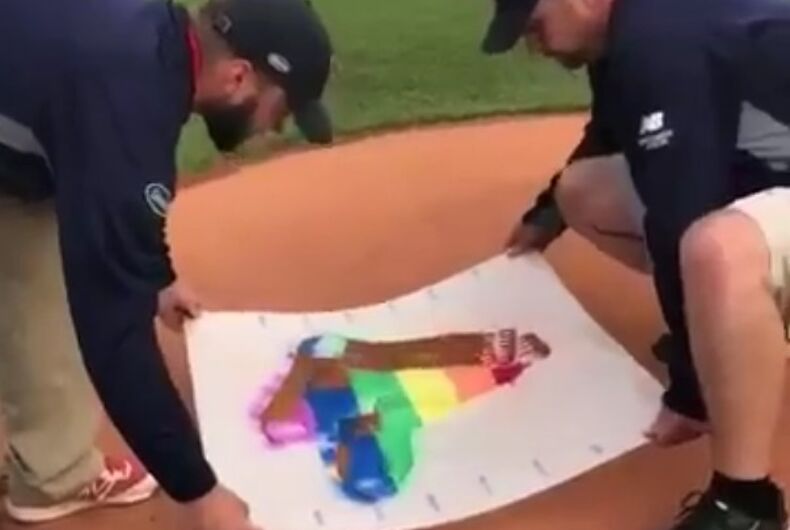 The symbol may have been innocuous enough, but some straight people were really upset by it.

What is wrong with these people? Why are we celebrating what God calls an abomination?

Barfapalooza. Get politics out of sports.

You DO have equal rights in my eyes and PEOPLE like me accept and believe in ur rights. It’s so hard to have an opinion and not offend someone. I just think sports should be sports and we should be able to watch it as ONE PERSON.

Liberalism is a mental disorder

Disgusting ! Nice to see my favourite team conforming to the sin of the world. No more Red Sox for my family !!

Some of them went beyond hating Pride Night and asked when Straight Pride Night would be.

So we get a straight pride and acceptance night? Have to be equal and fair after all.

If so why is it not celebrated. But you missed the point why do I have to celebrate gay pride? Why do have to explain that a rainbow is does represent gay to my kids? The point is if you want to be gay be gay but don’t expect everyone to be gay ( meaning happy) with you.

When is Straight Pride month? This is discrimination at its finest. Why can't we be proud of following God's Laws?

A straight person had to explain why there’s no Straight Pride Night.

Thanks for doing this. All 4 inclusion. As a white straight male, the entire world is set up 4me. A Pride night or logo doesnt take away from anything and only lets other people know you support them. Pretty simple, people. It can b about baseball & Pride!!!

LGBTQ fans were happy with the rainbow.

As a 9 year old in 1967 I discovered the Sox. I’ve been a fan ever since. Thank-you for celebrating Gay Pride at Fenway. It makes this fan prouder than ever of my Sox!

I don't watch baseball but I might start watching the Red Sox now! #peace

People who hate LGBTQ people still feel comfortable expressing that hate in public and in writing.

Which just shows why things like Pride Night are still needed.