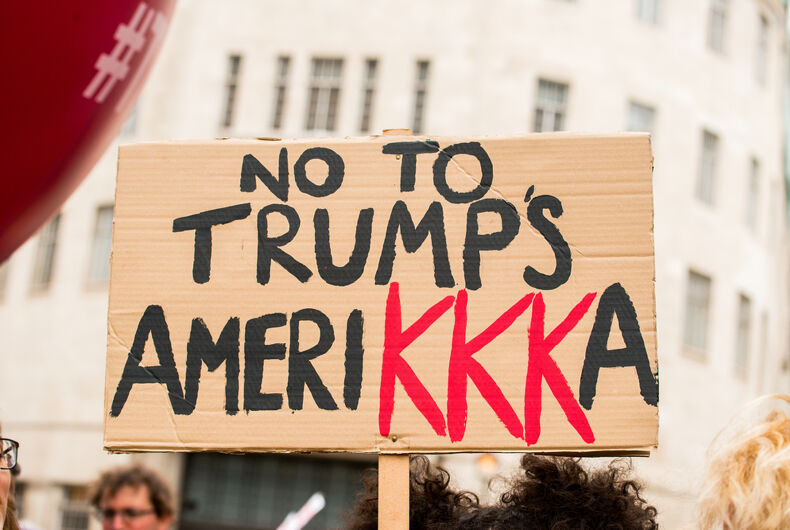 You’re not imagining it. A new study says that Donald Trump is bringing out the worst in white people.

You’ve suspected it. With every news item about people like Barbecue Becky in Oakland or the most famous racist lawyer in New York, you’ve felt sure of it.

Now, a new study claims to show that Donald Trump has made white Americans more hateful.

An as yet unpublished study presented to the Midwest Political Science Association suggests that there’s a causal relationship between Trump’s demagoguery against Latinos, Muslims, and African- Americans and the surge in reports of racist abuses.

Schaffner found that whites who were exposed to Trump’s invective against Latinos, blacks, Muslims, etc., were more likely to express negative views of those groups — even if they were Clinton supporters.

Schaffner says that Trump is giving respondents tacit permission to be as bigoted as they want to be.

”When they hear somebody saying something offensive about some group, then they basically say to themselves, ‘Oh, I can say that because this other person said it, so it must be OK’,” Schaffner said.

Hearing a major party’s presidential candidate — not to mention a sitting president — using language that, for example, refers to Latino immigrants as ”animals” causes people to think it must be acceptable for them too. Non-Hispanic white people, that is.

What’s happened, according to Shaffner, is a shift following the election of Barack Obama and the resultant backlash. Before, white voters liked explicitly racist candidates less and less.

But studies conducted during Obama’s presidency showed the penalties against explicitly racist candidates had evaporated.

So, there you have it. If Obama’s presidency activated racist feelings among white Americans, Donald Trump has given them permission to express those feelings, and even act on them.

If you’ve felt in your gut that Trump has emboldened racists, you now proof to back it up.

Pride in Pictures 1982: How kissing booths brought LGBTQ visibility to the world