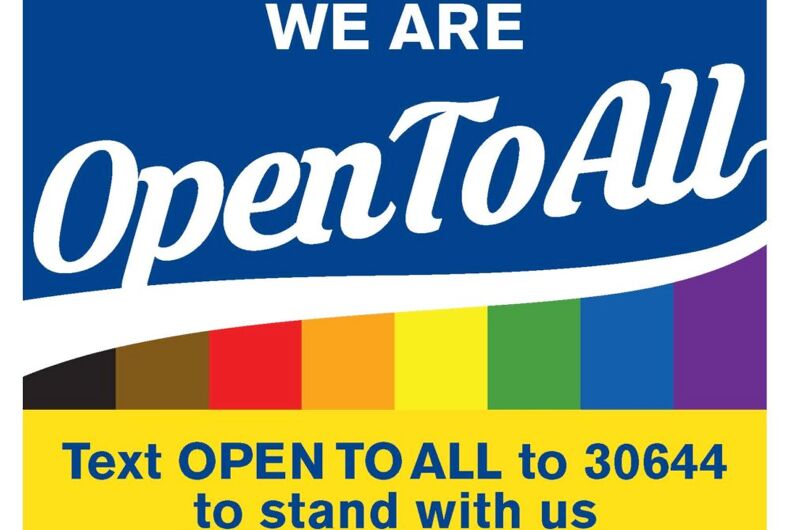 HRC Open to All posterPhoto: HRC

Following the Supreme Court’s muddy ruling in the Masterpiece Cakeshop case, the Human Rights Campaign is promoting an effort for stores to let customers know–especially LGBTQ customers–that the shops welcome their business.

HRC highlighted the “Open to All” campaign with a full-page ad in USA Today, The group has a toolkit that includes social media suggestions and a map to track the volume of business participating in the campaign.

The effort isn’t exactly a new idea. Mike Pence, as governor of Indiana, signed  a religious liberty law that was a license to discriminate, local activists organized an “Open for Service” campaign in opposition, and businesses started posting signs in windows reading “This business serves everyone.” In many cities, a rainbow flag in the business window serves the same purpose.

Of course, for conservative Christians the use of a rainbow on the HRC sign sends a clear message that the business is gay friendly and may not welcome them. The prominent use of the HRC logo also makes a political statement. By contast, the Indiana symbol was studiedly neutral: a shop window with a heart in it.

Of course, HRC doesn’t pretend to be neutral when it comes to LGBTQ rights. The group is hardly alone in trying to make financial hay from the Supreme Court decision. Alliance Defending Freedom, the conservative Christian legal advocacy group that represented the baker in the case, is using the ruling to do the same.

HRC is also using the effort to promote the Equality Act, a Congressional bill that would ban discrimination against LGBTQ people. Unfortunately, the legislation isn’t going anywhere in a Republican Congress.

Ultimately, it’s the Supreme Court that will have the final say on the matter, and the conservative justices there may have a very different idea of what being open to all means.

From Jim Crow to gay cakes: The Trump administration’s war on civil rights

Pride in Pictures 1990: A private embrace in a public parade