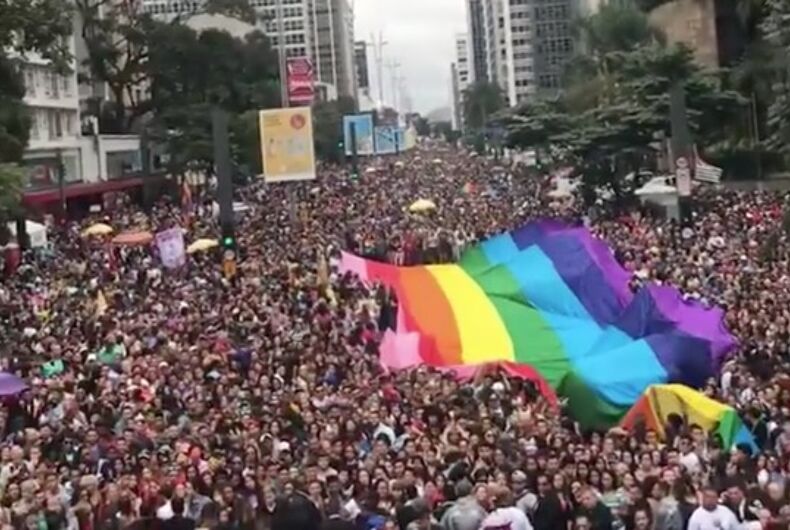 Millions of revelers stream down the streets in Sao Paulo's pride parade.Photo: Instagram/paradasp

São Paulo Pride 2018, held on the 3rd of June, saw over 3 million visitors take over the capital city of Brazil. The event is now in its 22nd year, and dubs itself the largest gay pride parade in the world.

This year’s theme was Elections: Power for the LGBTI+ Our Vote, Our Voice, and was held amid an upcoming election. Many on hand carried signs stating, “Fora Temer” (Temer Out). President Michel Temer is widely disliked, and many are seeking his impeachment.

Present at the event’s opening was Mônica Benício. In March of this year, her wife Marielle Franco was shot and killed in Rio de Janerio.

Franco was a black, lesbian city council member, and police believe she may have been assassinated for her outspoken political views, including views critical of President Temer.

Popular Brazilian actress Fernanda Lima, dressed in the colors of the transgender pride flag, greeted revelers at the event opening.

“We cannot let queer phobia continue to kill,” Lima told the crowd, referencing the loss of Franco and many others to violence.

While the day was cold and wet, enthusiasm wasn’t dampened as Claudia Regina, the President of the LGBT Pride Parade Association of São Paulo, declared the event the largest pride event in the world. Worries that both weather and an ongoing trucker’s strike in São Paulo could weaken participation

Their official website also urged the local community to ignore local rumors that the event would be cancelled, labeling such as “fake news.”