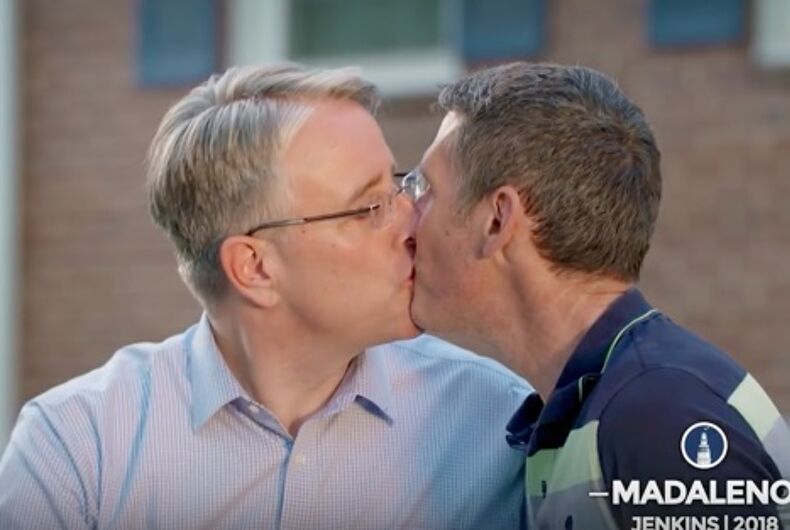 Maryland gubernatorial candidate Richard Madaleno made history with a political ad shown on Fox & Friends this morning. The spot ends with Madaleno kissing his husband, Mark Hodge, on the front lawn of his home.

The ad, dubbed “Take That,” highlights the various ways the progressive candidate has stood up against the Trump agenda, but ends with a humorous – and pointed – note.

“What’s the number one way I’ll piss off Donald Trump and the Republicans?” Madaleno asks the camera before kissing his husband. “Take that Trump!”

“At a time when political attacks by Trump and other Republicans are fueling so much hatred and division, we need to stand up for the people we love and to continue to confront harassment and discrimination against women, African Americans, immigrants, LGBT couples and so many more,” said Madaleno in an emailed statement.

“Having led the charge for marriage equality, achieving true equality and justice for all Marylanders will be my priority as Governor. June is LGBT Pride Month and I couldn’t think of a better time to release this ad. I am proud of my family, proud of my record of standing up for our progressive values and proud to be unflinching in standing up against hate. Love does truly trump hate.”

“At a time when the White House and other anti-LGBTQ politicians are attempting to erase our visibility and rollback our rights, Rich Madaleno is boldly stating he’s proud of his family and will fight for all Marylanders if elected,” said Mayor Annise Parker, President & CEO of LGBTQ Victory Fund.

“It is great to see him share his love for Mark and the kids with voters too – especially in a political ad airing during the president’s favorite television show.”

In 2015, Hillary Clinton made the political history books for showing same-sex couples kissing in one of her online campaign spots.