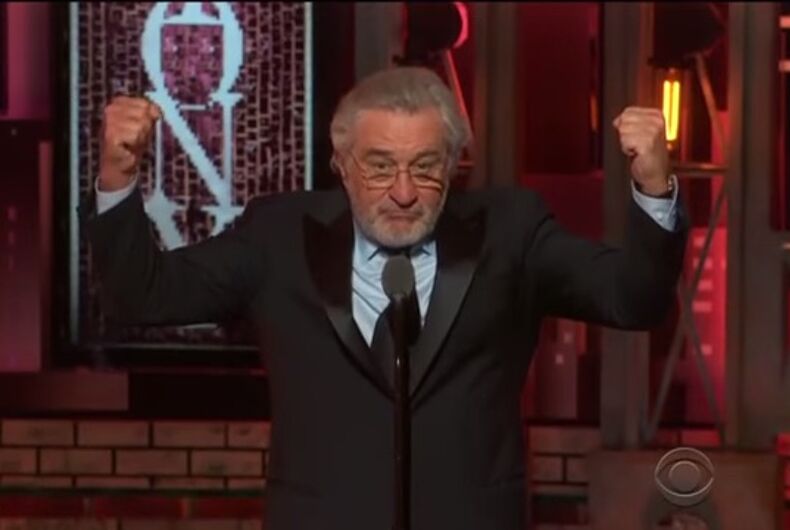 Robert De Niro got a standing ovation at the Tony Awards ceremony, not for being Robert De Niro, but for saying, “Fuck Trump.”  De Niro’s comments, bleeped though they were, quickly went viral, and the actor won kudos from the Twitterverse for taking such a high-profile stand against the president.

Let’s face it: a lot of people have said the same to their friends or to themselves over the course of the Trump presidency. To hear it from an acting icon during a live prime-time broadcast was validation of the deep well of antipathy that Trump stirs among a lot of Americans.

But just because De Niro’s rant was enjoyable doesn’t mean it was smart. In fact, it’s exactly the kind of unfiltered outburst that the president himself would make. (Just ask Justin Trudeau.)

De Niro has every right to express his opinion. However, when you consider the way other participants in the ceremony went about criticizing Trump, you can see the difference between hamming it up for the crowd and trying to bring people around to your point of view.

Consider Andrew Garfield’s acceptance speech, in which he addressed the Masterpiece Cakeshop court case. Instead of lecturing the television audience or telling the Supreme Court justices to drop dead, he hit exactly the right note: “We are all sacred and we all belong, so let’s just bake a cake for everyone who wants a cake to be baked.”

Similarly, actors Tony Shalhoub and Ari’el Stachel, winners for their roles in The Band’s Visit, stressed how much they belong in this country, subtly undercutting Trump’s policies against immigrants. Shalhoub talked about his father’s arrival in the U.S. nearly a century ago, saying, “Tonight I celebrate him and all of those whose family journeyed before him and with him and after him.”

Stachel gave a touching speech about how he hid his own identity after 9/11 out of shame for his Middle East origins, only to find success as an actor for that very reason.

“I want any kid who is watching to know that your biggest obstacle may turn into your purpose,” he said.

Even Glenda Jackson, who interrupted her acting career for decades to serve as a progressive Member of Parliament, had a more subtle approach than De Niro.

“There are people in this audience, in this country, in this city from every other country in the world,” said Jackson. “And you, as always, are welcoming and kind and generous, and America has never needed that more, but then America is always great.”

And then there was De Niro.

The problem with De Niro’s remarks is not that they were political. Any award show that hands out a bunch of prizes to Angels in America is by definition political. It’s not that it gives ammunition to the right. Fox News and the right-wing media bubble will always find plenty of ways to complain about the liberal cultural elite.

The real problem is that it was just so much like Trump. It was a comment meant to divide people and deepen existing divisions. Unlike Garfield’s and Shalhoub’s speeches, De Niro’s cursing wasn’t about what unites us. It was about what drives us apart.

Of course, that’s Trump’s political strategy. It’s all about the beleaguered us vs. the beneath-contempt them. Just like Trump’s rallies, invective is always good for a standing ovation. It’s also a reminder of why we’re in the mess we’re in to begin with.

Trump treats our allies like he treats his wives & mistresses