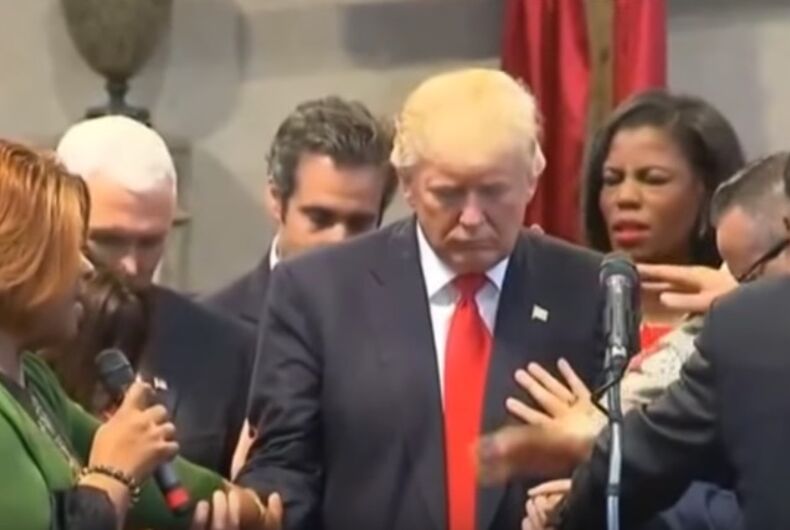 White conservative evangelicals are President Trump’s core base, so much so that they now essentially own the Republican party. So any sign that their support is slipping should be a cause of concern for Trump. And in the past few days, there are signs.

Trump’s policy of separating children from immigrants apprehended at the border has managed the impossible: bring together the religious right with liberals. No less a rightwing icon than Franklin Graham has condemned the forced separations in no uncertain terms.

“I think it’s disgraceful, it’s terrible to see families ripped apart and I don’t support that one bit,” Graham said.

Mind you, this is the same Franklin Graham who gave Trump a pass for speaking kindly about white supremacists, excused Trump’s sexual abuse, and who just loves, loves, loves Vladimir Putin.

Graham is not alone. A group of conservative Christian organizations, including the Ethics and Religious Liberty Commission of the Southern Baptist Convention, sent Trump a letter urging him to end his zero tolerance policy and “protect the unity of families.”

At its annual meeting last week, the SBC passed its own resolution along similar lines. Moreover, at the meeting there were signs that not everyone was comfortable with the denomination’s identification with Trump.

However, it would be a mistake to read too much into the dissent from the right. As a group, evangelicals have overlooked a lot of Trump’s sins because they want conservative control of the Supreme Court. Trump’s inhumane immigration policy may make them wince, but when push comes to shove, they may just agree to disagree.

Moreover, the condemnations aren’t quite as sweeping as they appear at first glance. Graham blamed the current situation, which is solely Trump’s doing, on “the politicians for the last 20, 30 years that have allowed this to escalate to where it is today.”

There’s no reason to think that a little problem like ripping babies from their mothers will turn Graham against Trump. Graham has all but proclaimed the president a direct descendent of Jesus Christ. He’s out on the stump working to ensure that Trump will have a Republican congress. One area of disagreement does not undo Graham’s fervor for the president.

In fact, Graham’s willingness to spread the blame around echoes Trump’s own lie that he’s not to blame for his own policy. Other religious right leaders take the same tact.

“I think it’s disingenuous to just attack President Trump when he didn’t create the problem,” Jentezen Franklin, a member of Trump’s evangelical advisory group, told The Atlantic. “He didn’t start the problem. But he’s willing to fix the problem permanently if Congress will just do their job.”

Or they downplay the problem entirely. “We’re mindful of the fact that children being separated from their parents can be harmful and traumatic, a reality that social science confirms,” Jim Daly, the president of Focus on Family, told The Atlantic in an emailed statement.

“In fact, it would be great if the same degree of concern that has been expressed in recent days was applied to the crisis surrounding the family at-large,” including issues like divorce, abuse, and alcoholism.

It’s easy–and comforting–to read too much into a few shifts among conservative evangelicals in a short period of time. But there’s no evidence to believe that they represent any real rift with the president.

We all have moments when we criticize our friends or step back from them for a bit. But that doesn’t mean the friendship is over.