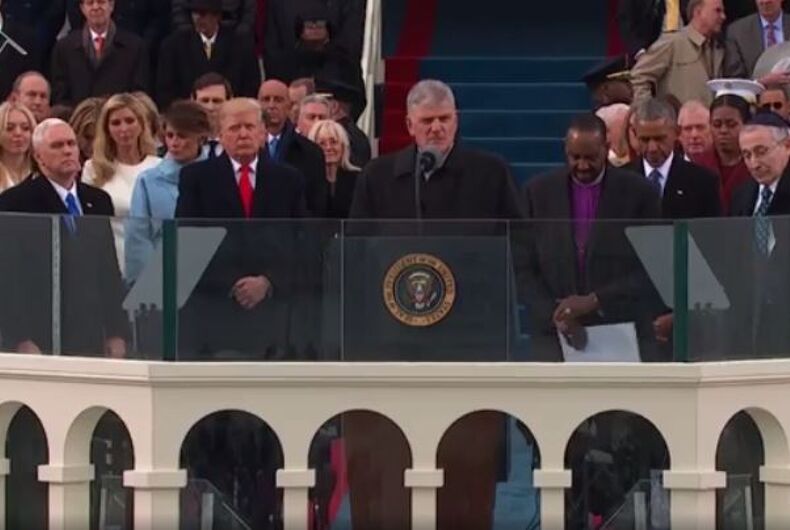 Don’t you just love when bigoted, divisive people ask why we can’t all just get along as soon as their side is up for legitimate criticism after their hatred brings violence and even death?

Franklin Graham, who regularly condemns Islam whenever there’s a terrorist attack carried out by a Muslim, has put out a statement that refuses to condemn the white supremacy at the heart of this weekend’s tragedy in Charlottesville.

He would also like everyone to lighten up on our poor old president, who took three days to condemn white nationalists, the KKK, and neo-Nazis. He too has never been as resistant to condemn what he called in his RNC speech “a hateful foreign ideology.”

“Shame on politicians who are trying to push blame on President Trump for what happened in Charlottesville, VA. That’s absurd,” Graham writes.

Shame on religious figures with selective memories who ignore President Trump’s race-baiting and lukewarm denunciation of “many sides” causing violence, with no mention of the hate groups responsible until three days had passed. Because they noticed.

“What about the politicians such as the city council who voted to remove a memorial that had been in place since 1924, regardless of the possible repercussions?” he continues.

Yes, how dare they not coddle racists who want a tribute to a slave-owning traitor. Don’t they know that might upset the KKK?

“How about the city politicians who issued the permit for the lawful demonstration to defend the statue?” he adds.

It stops being lawful the minute they start attacking people.

“And why didn’t the mayor or the governor see that a powder keg was about to explode and stop it before it got started? Instead they want to blame President Donald J. Trump for everything.”

You could use the same argument to ask why Trump didn’t declare martial law ahead of the planned hate rally. It would be an equally stupid question, by the way.

“Really, this boils down to evil in people’s hearts. Satan is behind it all. He wants division, he wants unrest, he wants violence and hatred. He’s the enemy of peace and unity.”

Yes, it’s the boogeyman down below. Always the convenient answer for those who lack the intellectual fortitude necessary for nuanced thinking.

“I denounce bigotry and racism of every form, be it black, white or any other.”

Hey, false equivalencies again! He really is just like Trump.

“My prayer is that our nation will come together. We are stronger together, and our answers lie in turning to God. It was good to hear that several Virginia and Charlottesville leaders attended church today at Mt. Zion. CNN said, ‘The racial divides that fueled Saturday’s violence were replaced by unity Sunday…’ Continue to pray for peace and for all those impacted by Saturday’s tragedies.”

Blah, blah, blah. Prayer never stopped violence. It never will. Pray all you want but don’t expect it to stop a Nazi in his tracks. If that worked, we’d be rid of Nazis by now.

While you’re vaguely denouncing racism, “on many sides,” maybe try denouncing white supremacists. Even Trump managed to get around to it eventually. We’ll wait, but we won’t hold our breath.