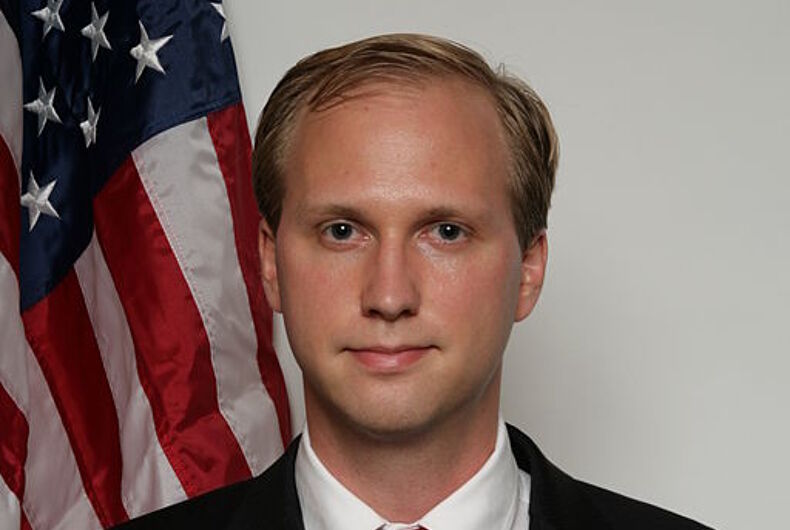 The 2018 midterm elections are seeing a record number of white supremacist candidates running for federal or state office, ]according to the Southern Poverty Law Center. While the actual number seems small–just eight–the candidates belie a much larger trend: the mainstreaming of white nationalism.

As you might imagine, the eight candidates aren’t exactly the best and the brightest. By far the most bizarre of the lot is Nathan Larson, a 37-year-old who is running as a Libertarian candidate for Congress from Virginia.

Larson believes that white supremacy is “a system that works” and that Hitler was “a good thing for Germnay.”

Not content to stop there, Larson has also advocated for pedophilia, running a chatroom for pedophiles. Asked by Huffington Post if he was a pedophile himself or just a supporter of pedophilia, Larson said, “It’s a mix of both. When people go over the top there’s a grain of truth to what they say.”

Larson also ran a chat room for incels, or involuntary celibates, a movement with its own awful history. His website encouraged readers to remember that “Feminism is the problem, and rape is the solution.” (Not surprisingly, Larson has a criminal history, having been convicted of sending a letter in 2008 threatening to kill the president.)

While Larson may win the prize as the wildest candidate in the field this year, he’s got a lot of close competition. Other would-be office holders hold similar white supremacist views, without the trimmings Larson has added.

For example, Arthur Jones is the Republican nominee for Congress from a district that includes parts of Chicago and its suburbs. He’s also a former member of the American Nazi Party and still an ardent white supremacist.

Another GOP Congressional nominee in Illinois, Bill Fawell, believes that 9/11 is a CIA conspiracy and Beyonce is connected to the Illuminati.

Jones’ beliefs include opposition to anything LGBTQ. On his website, he says the rainbow flag “represents an attack on traditional Christian morality and religious freedom.” The same site calls the Confederate flag “the flag of White counter revolution.”

Jones won the nomination because he ran unopposed. The GOP has disavowed him, and he stands little chance of success in a heavily Democratic district.  But his candidacy provides him with a platform, which is what similar candidates also seek.

Among the others of similar ilk:

The surge in candidates willing to talk about their vision of a white America is a worrisome sign.  The ties between white nationalism and vicious homophobia are strong.

Even though the candidates have a snowball’s chance in hell to succeed, the fact that they feel emboldened enough to run for public office is bad.

Some of that confidence can be traced to the conservative movement’s willingness to mainstream what was once abhorrent. That starts at the top, with President Trump’s failure to condemn the murderous Charlottesville white nationalist rally last year.

In fact, Trump has a habit of retweeting white supremacists’ posts, as does Donald Trump Jr.

But other ostensibly acceptable (it’s a relative term) conservative figures, like Ann Coulter and Laura Ingraham, find it okay to retweet white supremacists’ posts to their millions of followers. Those kind of actions give reprehensible views the veneer of acceptance.

And that isn’t even addressing any of the dog whistles, like the Trump-created controversy over kneeling players in the NFL, that have racist undertones.

Trump’s election depended on his voters feeling anxious that whites would be soon be a minority in America. It’s a short jump from there to outright racial resentment.

White supremacists are ready to exploit that fear of the other. They’ll make sure that fear includes fear of LGBTQ people as well.

Pride in Pictures 1988: A quiet moment